Unbeaten record washed away on the south coast 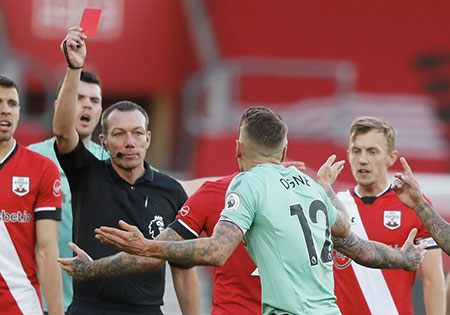 Everton's flying start to 2020-21 came to a shuddering halt at St Mary's as they were comfortably over-turned by Southampton and had a man sent off for the second week running.

Wearing their “sea foam green” third kit for the first time, the Toffees looked a shadow of the side that roared to the top of the Premier League with four straight wins and they fell behind 2-0 by half-time to goals from James Ward-Prowse and Che Adams.

Carlo Ancelotti's men were still chasing the game with 17 minutes to go when Lucas Digne was shown a controversial straight red card for what appeared to be an accidental stamp on Kyle Water-Peters's foot and the sight of James Rodriguez hobbling through the closing stages with an apparent hamstring strain merely compounded Everton's misery.

Shorn of the talents of Richarlison up front and Seamus Coleman at right back, Ancelotti was forced into two changes, bringing Ben Godfrey in for his full debut in the skipper's place and starting Alex Iwobi wide on the left.

Gylfi Sigurdsson came into midfield in place of André Gomes but while the Icelandic midfielder had Everton's best moment of the game when he cracked an effort off the crossbar with 18 minutes gone, he was part of a midfield that lacked energy and failed to live with Southampton's quicker movement as the first half wore on.

Nathan Redmond had already fired a warning shot in the 12th minute when he scuffed a gilt-edged chance wide from a cross by Ryan Bertrand from the left and Stuart Armstrong also mis-kicked in front of goal 11 minutes later before Saints opened the scoring.

Ward-Prowse caught the visitors napping in midfield as he flicked a throw-in over Allan and fed Danny Ings who returned the pass to Ward-Prowse to advance into the box and fire across Jordan Pickford to make it 1-0.

Eight minutes later it was 2-0. This time the ball was worked down the Southampton left where Ings flighted a ball over Sigurdsson's head at the far post and Adams was on hand to rattle home a deflected shot.

Armstrong thought he had made it 3-0 when he raced onto a long ball over the top and smashed it past Pickford but the referee's assistant's flag brought play back and left Everton in with a chance of salvaging something in the second half.

Ancelotti hooked the disappointing Iwobi at the break and introduced Bernard but the Brazilian was unable to provide much more on the left than had the Nigerian and the manager moved decisively again with two more changes in the 58th minute when Abdoulaye Doucouré and Sigurdsson made way for Fabian Delph and Anthony Gordon.

The teenager looked like he might be able to provide the spark needed to reignite Everton as an attacking force but the team's chances of getting back into things were killed off when Digne tried to chase down Walker-Peters and stepped on his trailing leg. That prompted referee Kevin Friend to send him off despite the Frenchman's protests that it was an accident, with Video Assistant Referee, Simon Hooper, agree that the challenge merited a straight red.

A man down and with Rodriguez effectively incapacitated, it was simply a case of damage limitation over the final 10 minutes, with plenty for Ancelotti to digest as he looks to quickly get his team back to winning ways next week.