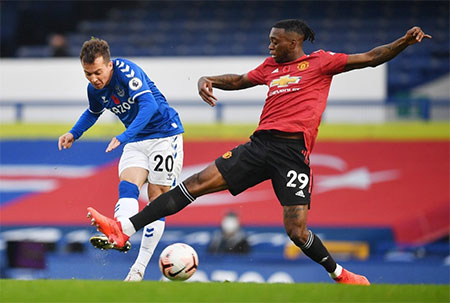 Everton lost for the third game on the bounce as their great start to the season unravels, with Manchester United boss Ole Gunnar Solskjaer getting a reprieve from the Blues' charitable defence.

Solskjaer came into the game with many believing he was fighting for his managerial life at United and Carlo Ancelotti's men appeared to be on their way to deepening his problems when Bernard scored in the 19th minute.

The visitors hit back, however, and had turned the match on its head with two goals in seven minutes from Bruno Fernandes. Everton battled in the second half but lacked quality throughout and were caught chasing an equaliser in stoppage time as Edinson Cavani scored on the counter-attack.

On the back of two really poor performances, there was hope that, with six changes and the returns of James Rodriguez, Seamus Coleman, Lucas Digne and Mason Holgate, Everton might be able to get back to winning ways.

And the early signs were promising as Bernard whipped an early ball in that Dominic Calvert-Lewin glanced narrowly over but Anthony Martial had the clearer sight of goal after a quarter of an hour when Fred knocked the ball over the defence following a corner but the Frenchman half-volleyed wide.

Then, after Marcus Rashford had sliced a shot onto the roof of the net, Bernard justified his inclusion from the start with the game's first goal. Calvert-Lewin flicked Jordan Pickford's long ball on and the Brazilian drove to the box before tucking a low shot inside the left-hand post.

The lead last just six minutes, though, as United picked their way easily through Everton's lines, Luke Shaw crossed from their left and Fernandes rose completely unmarked in the centre to steer a header beyond Pickford.

With more composure from Digne, Everton might have restored their advantage in short order but with Calvert-Lewin arriving in the box awaiting a square pass, the full-back went for goal instead and hammered his effort off the outside of the post.

Then, in the 32nd minute, the home defence stood too far off United's attack again and this time Fernandes was the one with the curling delivery that Rashford looked initially to have touched but replays confirmed the Portuguese's ball had gone straight in off the post.

Everton had more purpose going forward in the early stages of the second half but lacked quality in the final third. Instead, it looked as though Pickford had blundered into giving away a penalty on the hour mark but he escaped a VAR review after catching Harry Maguire with a follow-through trying to gather the ball after dropping it in front of the United defender near the byline.

Ancelotti withdrew the ineffectual Gylfi Sigurdsson in favour of Alex Iwobi but while the Nigerian provided superior energy and attacking intent, the change didn't translate into clear scoring opportunities. Neither did the introduction of Cenk Tosun for Rodriguez with 10 minutes to go.

Instead, it was Rashford who sprung the offside trap to collect a deep ball from the back but was denied by Pickford and though Bernard volleyed high into the Gwladys Street End and Abdoulaye Doucouré's effort was similarly wayward, it was left to Cavani to get his first goal in United's colours.

A weak and desperate Everton foray to the edge of the opposition box was snuffed our and Rashford was sent clear where he drew Pickford before slipping the ball to Cavani and the Uruguyan easily slotted home.

So, having gone into the last international break on the crest of a wave, Ancelotti and Everton go into this one needing to go back to the drawing board having seen all that early-season optimism destroyed. In truth, despite making the first breakthrough, the Italian's side barely troubled David de Gea's goal and with another three goals in the Against column, there are deep issues to be addressed at the back as well.