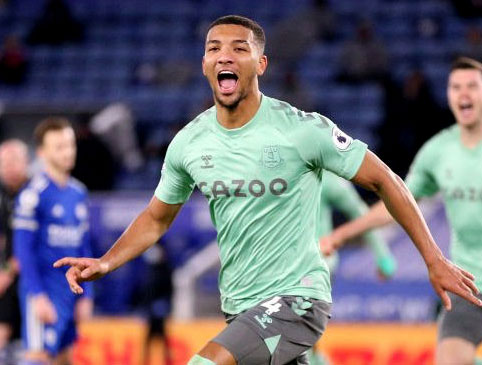 Everton battled their way past a rival for European qualification this season for the second time in four days with a laudable 2-0 win at Leicester City.

Having successfully nullified title-chasing Chelsea on Saturday, the Toffees registered another clean sheet by shutting down the Foxes' much-vaunted attack, although André Gomes escaped the concession of a late penalty when referee Lee Mason reversed his decision to award a spot-kick.

Richarlison's industry was finally rewarded with a goal in the 21st minute that put Everton ahead in what had shaped up to be an even and tightly-contested match. The Brazilian cut in from the left flank and caught Kasper Schmeichel out with a well-struck shot that the Dane couldn't prevent from finding the bottom corner.

Leicester, who had came close to scoring very early when Youri Tielemans fired narrowly wide, had seemingly put their rocky early-season home form behind them with a comprehensive win over Brighton at the weekend and Jamie Vardy thought he had levelled for the hosts within two minutes of Everton scoring but he could only plant a header straight at Robin Olsen from James Justin's cross.

Olsen had been handed the starting role by Ancelotti as Jordan Pickford was rested but the Swede had a comfortable evening overall despite occasional pressure from Brendan Rodgers's men over the remainder of the first half.

Cengiz Under saw a deflected shot fly just wide in the 25th minute and the Turk tested the Swede with another low shot shortly before half-time but it was Everton who might have scored again, this time when Mason Holgate was fouled and Gylfi Sigurdsson picked Dominic Calvert- Lewin out with the resulting free-kick but the striker headed into the goalkeeper's arms.

The visitors suffered a potentially damaging blow five minutes before the break, though, when Allan pulled up with an obvious hamstring injury and had to be stretchered off to be replaced by Gomes.

Back-to-back bookings for their full-backs, Holgate and Ben Godfrey, within five minutes of the restart, threatened to make Everton's task of defending their lead that much harder but both players stuck to their task well as Leicester were frustrated during the second period.

James Maddison had a rare sight of goal midway through the half but swept well over the bar and there were 18 minutes left of the regulation 90 when Everton doubled their advantage. Sigurdsson's corner from the left was headed goal-wards by Michael Keane, Schmeichel parried it to Calvert-Lewin and then palmed the striker's side-footed effort onto the crossbar but he couldn't prevent Holgate from hooking it in from close range.

Sigurdsson's first-time effort off Alex Iwobi's cross flashed over as the Blues went close again and they were coasting to victory when Gomes appeared to have handed Leicester a route back into the game in the 82nd minute. Chasing Perez into the box, it looked as though he had clipped the Foxes' substitute's foot but after watching the replays on the pitch-side monitor, referee Mason decided it hadn't been a foul after all.

Perez had the ball in the net with a couple of minutes to go but his “goal” was rightly chalked off for offside and Everton saw out stoppage time to secure another vital win that puts them right back into the mix near the top of the table.