Gordon and Baningime head out on loan 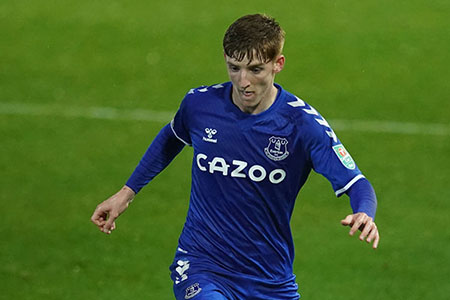 Everton's acquisition of Josh King from Bournemouth has paved the way for Anthony Gordon to join Preston North End until the end of the season.

Having partially made the breakthrough into the Toffees' first team this season, it was felt that the 19-year-old would be better served by getting regular action elsewhere and Preston came forward to take him on loan until the summer.

Meanwhile, Beni Baningime, at one stage an academy product who looked ready to cement his place in the senior squad when he was promoted by David Unsworth in 2017, has moved to Derby County on loan where he will link up with former club-mate, Wayne Rooney.


Phil Smith
1 Posted 02/02/2021 at 00:11:25
Good move for both. Benni needs this in a big way. He’s 22 and needs to play. Anthony is gonna light up the Championship if gets a chance. Lots of movement from Everton today.
Fran Mitchell
2 Posted 02/02/2021 at 00:19:43
This is a good move for Gordon. In the cup games at the start of the season he showed his potential, but in his cameos and when given a game at the start in the Premier League, it became apparent why Carlo wasn't playing him regularly. Just didn't manage to impose himself in games.

Regular gametime in the Championship will do him good. I reckon 18 months in total, then he'll be ready to play in the Premier League. He's definitely got the talent.

If I was to compare to any player, I would compare with him with Ashley Barnes. Similar in style and build. Barnes' 2 seasons in the championship set him up to make a real impression.

Baningime, hopefully a chance for the lad to reignite his career. Good luck to him. Terrible luck with injuries put paid to his Everton career.

Alun Jones
3 Posted 02/02/2021 at 00:33:22
It seems now we have a squad of 24 including Besic and Gbamin. This does seem a bit light for the final stage of a wide open league. Let’s hope at least we get Josh King and pray that we can keep this trimmed squad fit moving forward.
Minik Hansen
4 Posted 02/02/2021 at 03:04:01
Exciting for both, time will tell, all the best of luck to them. Rooney will take good care of Baningime in the right way.
Ajay Gopal
5 Posted 02/02/2021 at 04:58:31
Good luck to both of them. Will be keenly following these 2 lads - Gordon and Beni and Jarred, Jonjoe, Lewis Gibson and Simms for the rest of the season. Beni is the guy who excited me the most when he played a few cameos about 2 or 3 seasons ago. He looked an absolute Rolls Royce of a player, but got unlucky with injuries. Impressive work by Brands - clear strategy to give more game time to our youngsters. Up to them to impress and come back to Everton or find a new home.
Justin Doone
6 Posted 02/02/2021 at 10:06:52
A lot of people have commented on how good Beni looked a few seasons ago. I didn't see anything special myself but hard to judge on just a couple of games I saw.

I do think Gordon has something to show and offer. He's a good age and needs to show his ability. Probably a few extra shredded wheat in the morning wouldn't go amiss, he needs to strengthen up a bit.

Hope they both enjoy the loan move and get plenty of game time.

Martin Berry
7 Posted 02/02/2021 at 11:26:05
I think Beni needs game time and at 22 its very important if he is going to have a good career in the game.
Gordon has loads of skill and pace, from what I saw the problem was that he could not sustain it for the whole 90.
He has a lot of growing and strengthening up to do and a loan in a physical league will certainly help.
I am very excited as to how good he could become with regular games and some steak and eggs !
Tony Everan
8 Posted 02/02/2021 at 11:41:54
Good moves for both.

I think Gordon has been a bit unlucky not to get more game time recently as Richarlison has been poor by his standards. He is still very young though and will continue to develop and get better. He needs a bit more physical strength and resilience and that will come, he was born with a football brain and is a natural. I think he is a player who has a great future for the Everton first team and I am looking forward to following his progress.

Beni needs games to prove himself, this is a fantastic opportunity to do just that. I wish him the best of luck.

Interesting to see how they get on and where they will go, at the end of their loans.

Jay Woods
12 Posted 03/02/2021 at 00:34:44
Beni, I have always rated, but Gordon... talk about blowing your chance to impress, especially with Richarlison playing so badly. It's still early for him, but it's got to hurt to be shipped out on loan to PNE after being in the first team squad with us a few times in the first half of the season. His career as a PL player is already hanging in the balance.
Phil Smith
13 Posted 05/02/2021 at 03:00:12
Benni got some minutes the other night. Hopefully he’ll get more this weekend and I expect Gordon to start at Preston.