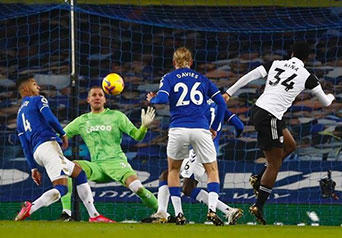 Everton came back down to earth following Wednesday's exciting extra-time FA Cup win over Tottenham with a hard thud after turning in another horrendous home performance, this time against relegation-haunted Fulham.

Like Newcastle before them, the Cottagers came to Goodison Park on a long run without a Premier League win but came away with three well-earned points against a lifeless display from Carlo Ancelotti's side.

New loan signing Josh Maja scored two second-half goals to hammer home Fulham's overall superiority on the day while the abject Toffees didn't manage an effort on target until the 76th minute, although Josh King had a goal ruled out a couple of minutes later for offside.

With his team having been involved in that marathon tie against Spurs four days ago, Ancelotti made a number of changes, particularly in defence where Mason Holgate and Ben Godfrey partnered each other at centre-half and Seamus Coleman started at right-back.

In midfield, James Rodriguez and André Gomes came back in after missing out in midweek with minor injuries but Gylfi Sigurdsson kept his place and appeared, at least initially, to be deployed in a “false nine” role with Richarlison playing off him.

King was named among the substitutes was eventually introduced in the 56th minute, by which time Everton were already a goal down and looking utterly bereft of ideas and penetration.

Fulham, adrift from safety in the relegation zone and without a win in 12 games, began with energy and purpose and could probably have counted themselves unfortunate not to be comfortably ahead by half-time.

Robin Olsen, starting again as Jordan Pickford continues to recover from a rib complaint, punched ineffectively at a free-kick but Maja hooked the loose ball over from close range in the eighth minute before Bobby Decordova-Reid flicked a corner onto the post a minute later.

Harrison Reed then went close and Ademola Lookman came within inches of marking his return to Merseyside with a goal but bobbled his effort the wrong side of the post.

Everton briefly threatened 10 minutes before the interval when James played Gomes in but the Portuguese's shot was well off target before Coleman went on a driving run and drilled a left-foot shot off the outside of the post.

The second half was just three minutes old when the visitors got the goal they had been promising. With the Blues' midfield dropping off, Ola Aina advanced unopposed towards the penalty area, played a one-two with Lookman and then centred for Maja to easily convert in front of goal.

Ancelotti responded belatedly by throwing King on for Tom Davies and Michael Keane on for Coleman but it was Fulham who almost doubled their lead within three minute when Digne was dispossessed, the away side countered and Lookman smashed Ruben Loftus-Cheek's pass over the bar.

The second goal did arrive in the 65th minute, though. Reed was given space to line up a shot from distance that Olsen could only palm onto the post and Maja was on hand to turn the ball in.

The ineffective Rodriguez hobbled off for Bernard with 22 minutes left and Sigurdsson finally put the ball on target with a bouncing shot from 20 yards and Keane had a tame header easily caught in the 89th minute but, on the whole, it was dreadfully poor fare from Everton who passed up the chance to move into fifth place, level on points with Liverpool.