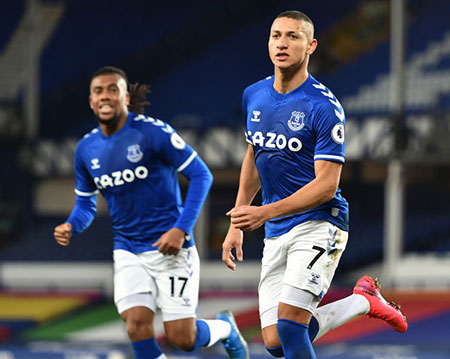 Everton ultimately couldn't live with Manchester City at Goodison Park, losing at home to Pep Guardiola's relentless side by two goals for the fourth season running.

Since hammering them 4-0 in January 2017, the Blues haven't really been able to land a glove on City on home turf and while they briefly gave them a fight by pulling level at 1-1 in the first half, the visitors simply had sufficiently superior quality that they barely had to get out of second gear.

Richarlison's somewhat fortunate finish at the end of a move of excellent but rare quality had cancelled out Phil Foden's opener but a trademark left-foot Riyad Mahrez finish midway through the second half and a 77th-minute Bernardo Silva strike put the match comfortably beyond Carlo Ancelotti's men.

After the horror show of a performance against Fulham on Sunday, the Italian restored the defensive partnership of Yerry Mina and Michael Keane, returned Mason Holgate to right back and Ben Godfrey to the left while Lucas Digne pushed up into left midfield.

Allan was given a few more days to recover from his hamstring injury and was left out of the squad but James Rodriguez took a spot on the bench alongside Josh King. Jordan Pickford started in goal for the first time in four games.

City started the match in ominous fashion, dominating possession and forcing a save from Pickford when Joao Cancelo lined up a shot from distance that the keeper pushed away. Guardiola's side won a succession of corners as they pressed and probed and they should have gone ahead when an error by Tom Davies let Gabriel Jesus in but he fired over the bar.

Everton had struggled to get things going in forward areas but, nonetheless, had had some promising openings, not least when Digne swept a ball into the box that was met but Abdoulaye Doucouré but rather than go for a volleyed attempt on goal, he tried to tuck it inside for Richarlison but it it a defender instead.

They lost Mina to injury, too, when the Colombian was forced off after 17 minutes with a calf problem and was replaced by Seamus Coleman, with Holgate moving inside to centre-half and in the 32nd minute, they fell behind.

Another Manchester City corner was only headed as far as Mahrez, he twisted and turned before crossing for Rodri and when his header bounced off Keane and fell to Foden, the young midfielder lashed a heavily deflected shot in past Pickford.

To Everton's credit, they rallied rather than folded and equalised with a really nicely-worked goal just six minutes later. Gylfi Sigurdsson found Alex Iwobi down the right, he slipped a clever square pass into the box for Coleman and when Digne met the Irishman's floated chip with a left-foot volley, the ball bounced off the post and Richarlison was there virtually on the goal line to knock it in with his thigh.

Such moments of incisiveness were rare from the Toffees, though, and their defence was by far the busier in the second half. Holgate gifted the ball straight to Bernardo six minutes after the interval but Pickford parried the Portuguese's shot away and four minutes later, Kyle Walker played Jesus in but the Brazilian smashed his shot narrowly high and wide.

Sigurdsson had a half-chance at the other end when Iwobi picked him out on the edge of the box but his shot was blocked and looped into Edersen's arms and in the 63rd minute, City restored their lead. Bernardo laid a short pass off to Mahrez who had all the space he needed to line up a shot from 18 yards, bend it around Pickford and in off the post.

Ancelotti responded by withdrawing Davies and Iwobi in favour of King and James but a tiring Everton were unable to create anything of note and it was City who wrapped things up 13 minutes from the end. Silva was allowed to run across the edge of the area and drill a shot in off Pickford's gloves to make it 3-1 while Mahrez almost punished Sigurdsson in stoppage time but placed his effort wide of goal.

It was the first time Everton had lost successive matches since early November and while the result moved City 10 points clear at he summit of the Premier League, it leaves Everton in seventh place, five points off fourth place and three behind Liverpool whom they face at Anfield on Saturday.