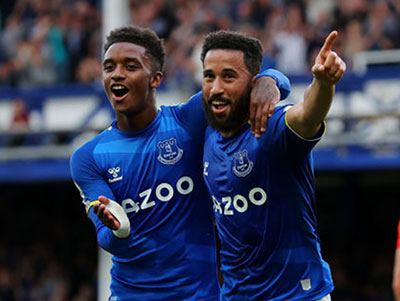 Andros Townsend scored his fourth goal of the season, this time from the penalty spot after Allan had been fouled in the box

Everton got back to winning ways and registered their third successive home win of the season with a routine if somewhat dull home victory over hapless Norwich City.

The Canaries came into the game having lost 15 straight matches Premier League matches either side of their relegation back to the Championship last year and only ever threatened to end that run when Mathias Normann tested Jordan Pickford from distance late in the first half and early in the second.

The Toffees, meanwhile, did enough to earn the victory thanks to an Andros Townsend penalty and a second goal of the campaign for Abdoulaye Doucouré who made sure of the points just as Norwich were trying to force their way back to parity in the final quarter of an hour of the match.

With Richarlison and Dominic Calvert-Lewin still out injured, Rafael Beinitez persisted with Salomon Rondon up front as the Venezuelan made his third successive start since arriving on a free transfer on deadline day while Ben Godfrey deputised for Seamus Coleman at right back again.

Everton lacked imagination going forward for much of the first half but they had their first real chance in the 19th minute when Doucouré got a rare opportunity to drive forward and when Demarai Gray dummied Alex Iwobi's cross, Townsend was there at the other side of the area but his weak shot was easily saved by Tim Krul.

A couple of minutes later, Gray beat his man smartly to swing a teasing ball across goal but there were no takers in the middle before Allan drew the foul that would hand Townsend the chance to put the hosts ahead from the spot. The Brazilian knocked the ball past Ozan Kabak and was caught late by the defender, prompting howls for a penalty from the Everton players, claims that were eventually upheld by referee David Coote following a lengthy check by Video Assistant Referee, Lee Mason, and a trip of his own to the pitch-side monitor to make sure.

Townsend made no mistake with an emphatic conversion from 12 yards but it wasn't to spark a deluge of goals from Everton who remained fairly subdued to the end of the first period when Pickford was forced into his first save of the game as he pushed Normann's low drive behind following the away side's first spell of pressure.

A great turn by Townsend early in the second half allowed him to advance into the area and fire a low shot that just missed the near post while at the other end Pickford had to palm another impressive effort from Normann over and Ben Gibson missed a free header when he failed to make contact on a dangerous Norwich free-kick.

The Canaries were growing in confidence and Normann had an opportunity to test Pickford once more with a direct free-kick after Rondon had been adjudged to have fouled him in a dangerous area but he sailed his shot over.

Ultimately, Norwich's lack of cutting edge up front meant that Everton were largely untroubled despite sitting back a little too much for the Goodison crowd's liking and the Blues' superior quality told 13 minutes from the end of the regulation 90.

Allan picked up a loose ball near the centre-circle in the Norwich half and found Gray who threaded it to Doucouré to take a touch and then lash a shot back across Krul to make it 2-0.

Tom Davies came on for Gray in the 83rd minute and had an attempt with the outside of his boot deflected behind and from that corner, Godfrey almost plundered his first Everton goal. The defender met the ball as it dropped inside the six-yard box but Krul made himself big and denied him.

Promising Academy product Lewis Dobbin was handed his debut late on and enjoyed a few assured touches as Everton comfortably saw out a win that keeps them among the leaders at the top of the table ahead of the trip to Old Trafford next weekend.