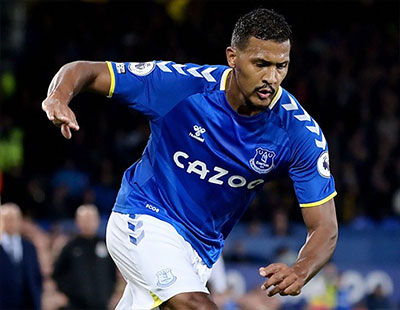 Everton slumped to a fifth defeat in six games and sank to 14th in the table on the back of another abject performance, this time against an equally poor Brentford side.

Ivan Toney scored the game's only goal from the penalty spot after Andros Townsend was belatedly penalised for catching Frank Onyeka in the face with a high boot but the visitors will feel there should have been a spot-kick at the other end when a clear shirt-pull on Salomon Rondon went unpunished.

Poor refereeing aside, Rafael Benitez could have few complaints about the result, however, as his charges toiled their way through a display that lacked imagination, creativity and any cutting edge and which was met with fury at the final whistle from the travelling fans, many of whom will be fearing how bad this campaign could yet get.

Though Richarlison was serving a one-match suspension, Dominic Calvert-Lewin was still not fit and Demarai Gray was only deemed fit enough for a place on the bench, Benitez was at least able to welcome Abdoulaye Doucouré back in midfield where Allan continued and Fabian Delph dropped back to the bench.

The much-maligned Salomon Rondon got another chance to impress as the lone striker in Richarlison's absence while Alex Iwobi began in his favoured more central role between Anthony Gordon and Andros Townsend but Everton really only worked Alvaro Fernandez in the Brentford goal once in the first 45 minutes.

Rondon forced the Spaniard into a smart save as the Toffees tried to respond immediately to going a goal down to Toney's penalty a minute earlier. The striker had stroked home from the spot after referee Darren England had been advised by VAR Jonathon Moss to review Townsend's high foot on the pitch-side monitor.

Rondon's chance was a rare moment of promise in the final third for Everton and it was the home side who had the only other half chance in the first period, a half-volley from Bryan Mbeumo that was comfortably saved by Jordan Pickford.

However, the Venezuelan had a case for a penalty of his own in first-half stoppage time when Charlie Goode visibly almost pulled his jersey over his head as they challenged for a centre by Townsend but there were almost no appeals from the Blues' players and Moss did not see a “clear and obvious error” from the match-day referee.

With Brentford looking a shadow of the team that saw Arsenal off so comfortably on the the opening day and rallied spiritedly to deny Liverpool victory on this ground earlier in the season, Everton just needed to find some rhythm and the semblance of an attacking plan to break the Bees down.

Despite seeing much more of the ball in the second half, though, Benitez's men remained pitifully toothless and it wasn't until Gray was introduced with 20 minutes to go that they finally looked capable of causing Brentford problems.

Rondon had had a shot charged down in the 57th minute and Iwobi's snapshot was saved by Fernandez three minutes later and there would be just one more opportunity for the striker, who remained on the pitch for the full 90 minutes as Benitez opted not to make any further substitutions, but he headed Seamus Coleman's cross well off target.

With just one win in nine games, only four goals scored in a run of seven without victory and a sequence of difficult matches looming, Everton are in increasing danger of getting sucked into a relegation fight for which they appear ill-equipped if they can't keep their best players fit.

The first Merseyside derby looms on Wednesday and on the evidence of today it promises to be a miserable evening for Evertonians fed up of a never-ending cycle of hope and failure.