Everton revert to relegation form with dire defeat at Palace 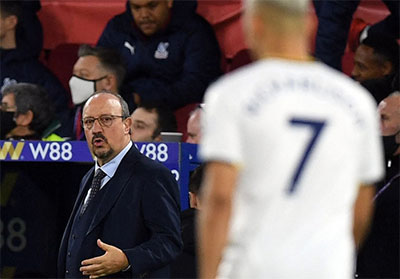 Everton failed to carry any momentum gained from Monday's win over Arsenal into this trip to South London as Conor Gallagher stole the show and Rafael Benitez fell further out of favour with the Blues' travelling supporters.

The Spaniard was the subject of the angriest chants yet from irate Evertonians following his decision to leave Lucas Digne on Merseyside and withdraw Richarlison from this game with less than an hour played.

The Brazilian had struggled to make an impact with precious little service as Everton put in what was, collectively, another desperately poor display and was visibly frustrated to be replaced by Salomon Rondon.

The Toffees were trailing 1-0 at that point to Gallagher's strike late in the first half and they fell further behind in the 62nd minute when James Tomkins punished more suspect Everton set-piece defending.

Rondon pulled one back and Anthony Gordon came very close to equalising but, instead, it was Gallagher who had the last word with a tremendous strike in stoppage time.

The news that Digne had not travelled with the squad strengthened the belief that the Frenchman has fallen out badly with the manager but it was compounded by the loss to injury of Allan who picked up a knock on Monday and wasn't able to train fully on Friday.

Still, Benitez finally opted for a three-man midfield, albeit one without a genuine holding man, with André Gomes and Fabian Delph playing alongside Abdoulaye Doucouré. The out-of-form Andros Townsend was preferred to Gordon on his return to his old stomping ground while Ben Godfrey continued at left-back as Mason Holgate partnered Michael Keane in central defence.

The early signs weren't good for the Blues who looked nothing like the front-foot, determined outfit they had been in the second half against the Gunners. Instead, it was all Palace. Where Benitez has bemoaned that he doesn't have the personnel to institute a possession game at Everton, Patrick Vieira has got a collection of inferior players playing some fairly attractive and effective football which would have resulted in them taking an early lead had it not been for Jordan Pickford who made a smart save with his foot to deny Andre Ayew his first goal in more than a year.

Gallagher then fired narrowly over and Pickford saved from Wilfried Zaha as Palace continued to exploit all the room Everton were giving them in the final third of the field.

Demarai Gray briefly came to life in the 16th minute when, following some tidy football against the touchline, he tested Guaita with a low shot and then repeated the feat just past the hour mark with the same result but, in between, the hosts had seen an effort by Marc Guehi deflect wide after the visitors failed to clear a corner.

Perhaps the best effort from Everton came 13 minutes before the half-time interval when Godfrey, the epitome of the drive and desire that was missing from the Toffees' collective display, powered down the left and crossed low but Gomes's volleyed shot was too close to the keeper who made the save.

Despite their torpor, Everton were heading to the interval level before Gray pressed the self-destruct button. In trying to knock the ball back to Seamus Coleman to clear, the winger handed it straight to Ayew who cut it back to the unmarked Gallagher to sweep it past Pickford.

Whatever Benitez said in the dressing room at the break appeared to have very little effect as there wasn't much improvement from the Toffees and it was Palace who might have scored again when Zaha picked Gallagher out with a 50th-minute cross from the left but his header dropped narrowly wide of the back post.

Five minutes later, Ayew scooped a clever ball into Gallagher's path and he rattled a shot into the side-netting as the Eagles continued to threaten while Benitez undercut his options going forward at the other end with the withdrawal of Richarlison.

The Brazilian had been troubled by a knock to his calf in the first half but looked to have run it off successfully by the second period. Nevertheless, the way Everton were playing, he having a particularly unproductive afternoon. He wasn't alone, however; Townsend was equally ineffective but remained on the field while Delph and Richarlison were sacrificed for Gordon and Rondon.

Richarlison's reaction said it all and the response from the travelling fans spoke even louder as they broke into chants in support of their Talisman and the most derogatory ones yet aimed at Benitez and his Liverpool connections.

Within four minutes, Palace were 2-0 up. Once again, Benitez's defence failed to deal with a corner and James Tomkins was on hand to score his first goal in two years to effectively put the contest past the sorry Blues.

A rare foray into the box by Doucouré ended with his shot deflecting kindly into Rondon's path and the substitute just had to bundle the loose ball home from close range to give Everton hope with 20 minutes to go.

With better finishing, Benitez's players might have spared him the criticism that will no doubt carry forward to Thursday's trip to Chelsea but after more excellent work by Godfrey down the left and Rondon's lay-off, Townsend fired a shot into a defender with Gordon open to his right.

Then Gordon himself found open grass to surge into and drove all the way into the Palace box but his low shot searching out the bottom corner was saved superbly by Guaita.

In between, Christian Benteke had almost found Ayew with a centre from the byline but Everton's misery was completed in stoppage time following another pair of blunders by their own players. Coleman tried to blast a free-kick near his own corner flag into an opposition player but instead gave it straight to Palace. The ball fell to Gomes on the edge of the area but he couldn't retain it and Gallagher profited, lining up a shot from 18 yards that he whipped impressively into the top corner to make it 3-1.

Everton's eighth defeat of the League season extended their recent run to just two wins in 13 games and leaves them bottom of the recent form table. More than that, however, the performance and the manager's decision-making has ratcheted up the pressure on his shoulders and further soured what little relationship he had with the supporters.

The difficulty of the return to London in just four days' time is unlikely to make life any better for Benitez who has overseen a sequence of results as poor as any by an Everton boss in the Premier League era.