Mina sidelined for another eight weeks 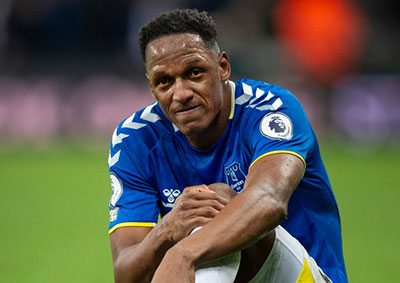 The injury that Yerry Mina sustained against Chelsea last week will keep him out until early October.

Paul Joyce of The Times reports that Frank Lampard has outlined the duration of the Colombian's latest rehabilitation based on the tests undertaken on his ankle which revealed ligament damage.

Mina managed only 13 starts for the Blues last season due to a succession of frustrating injuries and the new season was just 70 minutes old when he pulled up injured again following an innocuous-looking non-contact incident.

The club has made some massive mistakes: Tosun, Mina, Allan, James, Gabamin. For the millions we spent, we got nothing.

I'll be honest, when he went off with his ankle injury, I thought to myself "He's at it so he can leave on a free."

He might be injured but he will leave on a free.
All the massive contracts we gave to all these "nothing special" players have really set the club back.

But enough is enough: we're not a convalescent home (or shouldn't be) and players like Mina and Delph are nowhere near cost-effective.

Looks like we're lumbered with Mina until his contract expires. Next June?

Says it all when he said he came back too early from his last injury, he just wouldn't play if that were the case! Unless of course it was playing three games in a row for his country.

Great bloke, love him to bits but is everything we don't need in a player. He is made by Pilkington's.

I'm sure Everton would have sold him in the summer but no club would spend money on a player that is injury-prone.

Dressing room mascot is not paid at that salary level.

Dressing room mascot is not paid at that salary level.

Alan J Thompson
18 Posted 15/08/2022 at 06:06:57
A pity he's so injury prone as he's certainly a good player and I don't blame him for accepting a good wage offer or wanting to stay on it. I would however look at the medical team that studied his past injuries and medical condition as my first sight of him was for Colombia in the World Cup when he was moved to full back owing to injury and, I think, hadn't been in his Spanish club's team for similar reasons.

Let him go when his contract is up? Looks like we've signed and loaned out his replacements already.

Mina seems like a great bloke and he is a really good defender but if he's never fit then what's the point? Before the season started we knew this would happen, we hoped it wouldn't, but deep down inside we all knew it would.

Then he does his usual pantomime of pretending he might be able to play on.

Con-man and a cheat. He doesn't miss many Colombia games though…

Yes, I think you are right, I'm sure it has. His physique is similar to a Basketball player than a footballer and I wonder if certain fitness, training and physio regimes that NBA Players receive would benefit him?

John Kavanagh
24 Posted 15/08/2022 at 11:49:29
Barely a week into the season and the Finch Farm critical care wing is already on overtime and facing a bed shortage. We certainly know how to recruit 'em.
Alan McGuffog
25 Posted 15/08/2022 at 11:57:26
This man is destined to become a legend, joining the pantheon of greats that have graced the sacred turf. alongside Bernie Wright, Danny Williamson, Per Wotsit, Brett Angell.
Close the door behind you Yerry

Wrap him in cotton wool till January and try and offload him at any price. Get rid sooner if possible. Problem is, who would want him? I know I wouldn't touch him with a bargepole.

On the injury itself, he seemed to get it while just standing. Bizarre.

You can't build a team around a player until they have proved themselves. Without a stable, solid defence you can't build any consistency or foundations for the team.

Sadly Mina, Gbamin any Gomes have been broken by the Premier League and need moving out. Multiple, medium to long-term injuries caused without contact.

Dom could be in the same category. So we need a new striker for this season until Dom can recover and prove himself.

Just tell him that he's done here and will never be selected ever again.

Tony Abrahams
34 Posted 15/08/2022 at 14:44:13
I remember reading Marcel Brands talking about how he signed Mina. It was a game of bluff, holding his nerve and being patient.

The same Marcel Brands who told us he had way too much interference because people at Everton wanted to pay top dollar, and pay unbelievable wages!

How much is Yerry Mina going to earn from Everton during the 8 weeks he's going to be injured?

Get him gone asap.

Matthew Williams
38 Posted 15/08/2022 at 17:25:16
As a kid, I fucking loved our players during Gordon Lee's time in the hot seat. The team hardly ever changed and our players took part in loads of Cup games too, they all battled in matches and sweated blood for the cause...

But now, the players today almost sicken me with their antics and general lack of bottle.

As for Mina...I truly despise him and would force him to play for the reserves with his current injury (he ain't go no broken bones like) or tell him just to fuck off now.

I can also remember as a kid that Shankly use to totally blank injured players, whereas we mollycoddle them... we must now start to be ruthless as a club.

A total bottle job, his number is perfect too!

Didn't Franz Beckenbauer once play a competive game with his arm in a sling!?

If I needed medical advice, I'd see Harold Shipman before someone from the Everton medical department.

Before going allegedly lame for us as a direct consequence, obviously.

Mike Gaynes
45 Posted 16/08/2022 at 01:27:14
Always turns my stomach how certain folks here see a player injured and instantly accuse him of being a fraud or a bottler or a cheat.

They really, truly think a player would rather sit out than play.

As if he'd be in the lineup in the first place -- or even on the roster -- if that were true.

Now people are even putting Dom in that category.

I am sorry to say that my first impressions were correct.

Eddie Dunn
48 Posted 16/08/2022 at 08:43:36
Mina has been nothing but a liability. Not only is he physically brittle, with ligaments unable to cope with his long levers, he is also an embarrassing cheat. His pathetic behaviour, trying to wind players up, and feigning facial injuries with little to no contact.

A big daft fraud, who might entertain his friends with his clowning in the dressing room, but his clowning on the pitch has cost us a fortune.

His willingness to ruin himself playing for his country at our expense sums up his priorities.

This is a guy who was made for a pay-as-you-play contract.

My memory of that game is hazy but the Kaiser was probably injured during the game and, in those days of only one substitute, he would have chosen to stay on if it meant his team would be a man short.

He was such a brilliant player and his worth to the team and their morale meant that, even with one arm strapped up, he was still able to play a very important part in the game.

To me a number of players do that ie go through the motions of being committed to the cause. Allan missed the game the other day having "picked up a knock".

What the fuck... does he have trouble picking up his wedge, I wonder?

Tony Abrahams
51 Posted 16/08/2022 at 12:27:32
I sometimes get the feeling that some players will remain injured whilst the transfer window is open, because they don't want to leave their cushy little Everton number, Alan.

I don't put Allan in this category, and think he might be waiting for Everton to bring players in and then sanction him moving back to Italy. Who knows?

We always seem to have a treatment room full of injured soldiers but then again it's probably the same for other clubs.

I mean, and it's only a rumour, Liverpool have a big centre-half, Virgil or Morgan or Wyatt. Apparently he got injured a while back... It was kept very hush-hush.
No-one knew.

Get him gone if we can get any sort of fee.