On behalf of EFC Heritage Society

The latter stages of the Nineteenth Century were a time of terror and turmoil for the Yiddish-speaking Ashkenazi communities living in south-western Imperial Russia (present-day Ukraine and Poland). Anti-Jewish riots, or Pogroms, were not a new phenomenon but the assassination of Tsar Alexander II in 1881 provided a catalyst for fresh wave of anti-Semitic violence. The persecution precipitated a wave of Jewish emigration in search of sanctuary. Sweden, due to its close proximity, saw Ashkenazis settle in some number in the 1880s and 1890s.

Slightly ahead of the main wave of immigration were Baruch Israëlevitsch Hodish and his wife, Olga. Settling in Landskrona, a coastal town 140 miles from Gothenberg, the couple had six children, from Samuel born in 1875 through to Jacob (or Jakob) in 1890. To aid their assimilation into Swedish society, the parents became known as Maurice and Hulda whilst the children adopted their mother's maiden name of Lewin (also spelt Levin). 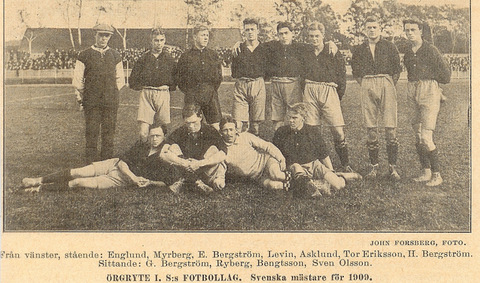 Orgryte IS team, 1909. Jacob Lewin back row fourth from right.

Jacob was blessed with footballing talent and became a right-back with Örgryte IS – debuting in 1907 against “Rangers” in an 8-2 victory. With Jacob still in his teens he won a league championship winner's medal in 1909. Playing alongside him for Örgryte was Axel Englund who would go on the marry Jacob's elder sister, Bertha. Jacob was called up to the national team a year later as Sweden thrashed Norway 4-0 in Oslo. He went on to represent his country at the 1912 Stockholm Olympics in a match against the Netherlands. His sixth, and final, international appearance came in November 1912 against Norway.

This appears to have been a pivotal moment in the twenty-two year-old's life. Jacob followed the route taken by many others and sailed to England. It is unclear if his intention was to settle there or use it as a staging post on the long journey to a new life in the USA. He headed to Liverpool where his elder sibling, Josef, was already residing. Here Jacob came to the attention of Everton F.C. director J. Davies. At a board meeting, held on 25 April 1913, Davies proposed that the club take a look at the Swede when the new season got underway. The board minutes record:

Mr. Davies submitted the name of Jacob Lewrin (sic,) a Swedish Amateur International right fullback. Age 23, height 5ft 9 ins., weight 12 stone 10 lbs and it was resolved to afford him a trial in August. 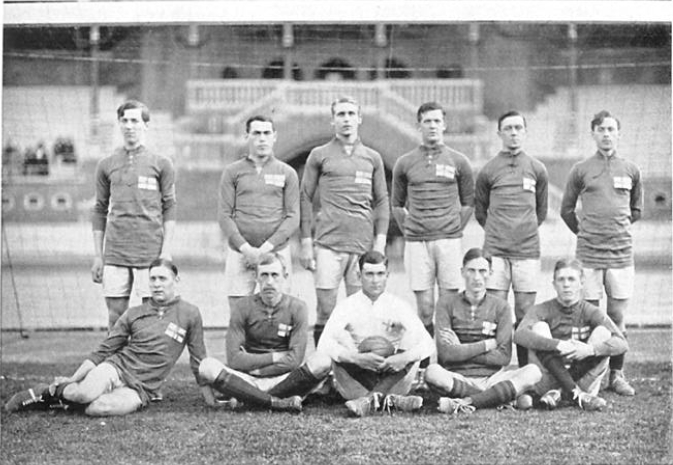 Jacob was selected to make appear once in a practice match and twice for the A team (the club's third team). After this trio of outings he was not mentioned in the Everton minute books again. Perhaps Jacob was not up to the standard required or maybe the red-tape connected with employing a foreign player put the Blues off taking things further.

Jacob's trail goes cold until 9 January 1925 when he wrote to his sister, Bertha, back in Gothenburg. His address was given as 26 Keble Road, Bootle and he signed his name as the anglicised “Jack”. In the missive he told Bertha how life was tough for his brother Josef (referred to as “Joe”) and his children and that they had booked their passage to the USA on 24th January to join Josef's eldest son Olaf (Eloph) at 1257 Forest Avenue West, Detroit. Records indicate that Josef may also have participated in the First World War. In Jacob's letter he also expressed concern that Bertha had not replied to his previous correspondence. His disquiet was well-founded – tragically, and unbeknownst to Jacob, his sister had passed away the previous September.

New research by Carl-Johan Johansson of Sports-Reference.com has established that Jacob remained on Merseyside for the rest of his life. In 1930 (using the name Jack Levine) he married Burton-on-Trent-born Mabel Maddox, who was employed as a boarding house manageress in Liverpool. . At the outbreak of the Second World War Jacob was residing at 8 Larkfield Close in Aigburth; his occupation was listed as a cold storage superintendent. His was already a widower, Mabel having passed away a year previously. At only 55 years of age Jacob suffered a stroke and died at Liverpool Royal infirmary on 10 December 1945. Jacob died intestate and without children so his estate passed to his brother, Josef (sometimes anglicised to Joseph) who had been employed as an interpreter on the RMS Baltic, sailing out of Liverpool. Josef subsequently became a shipping clerk; his descendents remain in Merseyside – they support Liverpool FC.

Jacob, in those two A Team appearances against Southport Park Villa and Marine, unwittingly wrote a chapter in Everton's history as, perhaps, the first foreign player to represent the club. Aside from David Murray (a South African with family links to the UK) Everton did not have a first-team player from beyond the British Isles and Channel Isles until Stefan Rehn – a Swede like Jacob – endured an all-too-brief brief spell with the Toffees in 1989.