A Letter from Tony Kay of Sheffield Wednesday, Everton and England

Editorial note: For Evertonians, the Championship-winning side of 1962-63 is held up as a cherished symbol of a glorious era in Everton's history under Harry Catterick – the consolidation of the club's reputation as the School of Science during a period in which the Toffees lifted three trophies, a haul which probably belied just how good a side it actually was.

It was alarming, therefore, to see re-published in the Liverpool Echo last week historial accusations made by goalkeeper Albert Dunlop that the title triumph in 1963 owed much to chemical assistance in the form of the drug Driamyl and the amphetamine Benzedrine. Though the article alludes to Dunlop being "an unreliable witness and driven by payment for his story dangled in front of him" by the Sunday People newspaper, there was enough inferred in the title of the piece and what followed to prompt Tony Kay, an important member of that Catterick team, to pen the following response.

Although the author of the Echo's article, David Prentice, was happy to allow Tony the right to reply, the newspaper ultimately declined to publish it over sensitivity to Dunlop's surviving family. So ToffeeWeb is providing him the opportunity here to respond on behalf of his teammates, both alive and sadly passed, with his side of the story.

Since my arrival on Merseyside in the long winter of 1962 until today, I’ve always received the most amazing support from Evertonians; sometimes it takes my breath away. Because of this, I feel the most loyal and dedicated fans I’ve ever met deserve some clarification with regard to the article in the Liverpool Echo by David Prentice on 11th November 2015 – How Everton won the league on performance-enhancing pills.

On behalf of my teammates, the League Champions of 1962-63, by far the greatest team in the land at that time, I’m writing this riposte because there are only a few of us left and they’re not local so are unable to defend themselves. 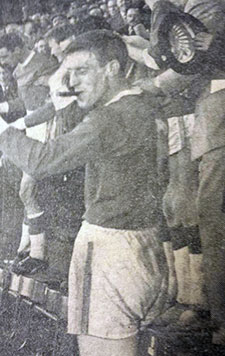 Tony with celebratory cigar after Everton sealed the 1962-63 Championship

I was part of that incredible team and there wasn’t a man more proud than me when we did our lap of honour at Goodison Park having stuffed Fulham 4-1 in the last game of the season. I even smoked a celebratory cigar, such was the level of my jubilation. I have no idea where it came from; I can only imagine a fan handed it to me and I never did get a chance to thank him for it.

To put this ludicrous story into perspective, the accusation that we were all drug-addled cheats was made by our then goalkeeper, Albert Dunlop, who was rapidly in decline and nearing the end of his very-average professional career.

At that time, Dunlop was dating a nurse so may have had some second-hand knowledge about drugs. He was an unpopular person who never socialised with any of his teammates and had his own problems. To give you a measure of the man, he was the only person my lovely, kind, gentle, gifted, much-loved and sorely-missed teammate, Gordon West, ever openly disliked. I never heard Gordon say a bad word about anybody, from any walk of life – professionally or socially – but in his words, Albert Dunlop was ‘a nasty piece of work; a bully and a thug’. He made Westie’s introduction to Everton FC from Blackpool a torrid time when he was really just a kid, straight out of school. He was embittered, cruel and deeply unpopular. He certainly picked his battles though – he never said a word to me; I imagine that was because my reputation as a ‘robust’ player and personality, preceded me.

Every single man in the Championship-winning team of 62-63 was a truly dedicated, talented professional who worked hard every single day. The matches were just the icing on the cake; behind those fantastic performances were endless hours of hard training: tactics, skipping, sprinting, cross country runs up and down the sand dunes and in the sea at Ainsdale come hell or high water, set pieces, discipline, blood, sweat and tears. We all missed our kids growing up – Christmas, parties, family holidays, births deaths and marriages – because we were hungry for success and nothing would stand in our way. 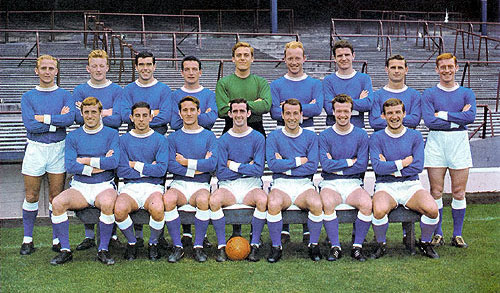 Harry Catterick was a winner; he carefully built his teams on a sturdy foundation of talent, youth, belief and dedication. Nobody was allowed to slack and our coach, Tommy Egglestone, worked us until we were spent. The 90 minutes on a Saturday afternoon was a welcome relief from the hard graft we’d put in prior to that. Everybody respected Catterick and, to be honest, we were all a bit scared of him. Backed by the might of Sir John Moores’ personal fortune, he orchestrated the birth of the Mersey Millionaires; he commanded respect and got it.

The only whisper of any kind of tablet I ever heard mentioned was the availability of a sleeping pill the night before an away game when we were staying in a hotel and a glucose pill in the dressing room before kick-off if the player asked for one. I’ve never taken an illegal drug in my life and I can’t imagine any of my teammates doing it either. It certainly didn’t happen in front of me and I never heard a whisper of it during my short-yet-glorious time at Everton Football Club. I find it deeply offensive to my colleagues that these accusations have been raked up again when they’re not here to defend themselves. 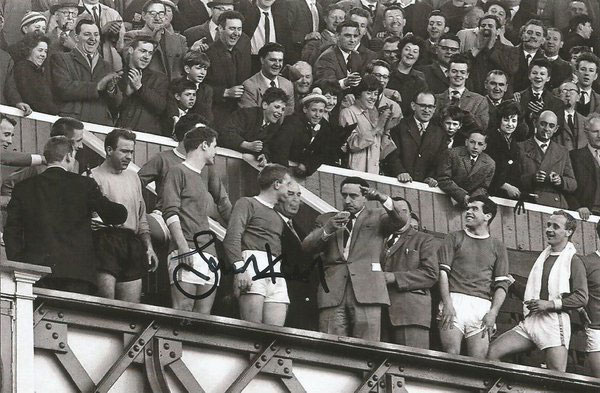 Champions! The 1962-63 team with manager Harry Catterick at Goodison Park

As an aside, the story referred to in the article was published in the Sunday People and penned by another man I dislike intensely, one Mike Gabbert. He is the one who was to become my nemesis by ending my glorious football career and, for all intents and purposes, my life. He exposed a betting syndicate myself and my then teammates, Peter Swan and David Layne, at Sheffield Wednesday had inadvertently become a part of by placing a single bet against our own team a couple of years earlier... but that’s another story.

Following my global life ban for the next 40 years, I continued to play for any football team who’d have me, usually for charity. From time to time, I came up against a team in which Dunlop was the opposing goalkeeper. He always came over to me to shake my hand. I always refused.