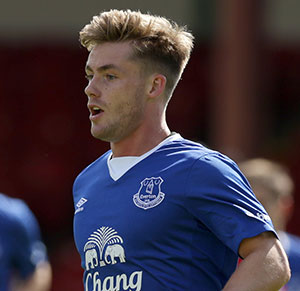 Conor McAleny ultimately failed to make the grade at Everton
Strikers Arouna Koné and Conor McAleny head the list of names on the list of released players submitted by Everton to the Premier League today.

Both players' contracts are up this summer and will be looking for new clubs, as will Delial Brewster and Russell Griffiths, two of the more familiar names from the Academy setup that also aren't being retained.

Signed by Roberto Martinez in 2013, Koné's Goodison career was disrupted severely by a serious knee injury just weeks into his first season, one which almost ended his career.

He battled back to fitness was unable to cement a place in the first team under either Martinez or his successor, Ronald Koeman.

Local-born McAleny, meanwhile, has spent years trying to make the breakthrough into the first team under successive managers but ultimately failed to convince that he has what it takes to make it in the Premier League.

The now-24-year-old forward has had a string of loan spells either side of a broken leg suffered during a spell at Brentford, with his last spell at Oxford United in League One suggesting he could have a successful career in the Football League.

McAleny scored 10 goals in 18 appearances in the same team as another former Blue, Ryan Ledson, this season as the Us finished 8th.

Kone, as you would expect,departs and McAleny must have known the writing was on the wall; but hopefully he can cement a place in the lower leagues and make a career for himself because he has talent.

Might see him in the Premier League in the future.

Then we should be grabbing for Ziyech! He would create chances and get the best out of whoever we have up front.

Ian Burns
4 Posted 09/06/2017 at 15:44:26
Shattered dreams. I feel for the youngsters and pray they make it elsewhere.
Daniel Lawrence
5 Posted 09/06/2017 at 15:59:21
We should retire the #9 shirt in recognition of Kone's contribution.
Terence Tyler
6 Posted 09/06/2017 at 16:25:00
We got a few mill for Gibson in January, Eugene, also agreed ٦ mill for Cleverly which is due to be paid about now. I think we will struggle to get much for Niasse, probably about half the 㾹 mill we paid for him. So your total is about right.
Peter Gorman
7 Posted 09/06/2017 at 16:32:17
McAleny had a great season with Oxford and I'd be surprised if they don't go for him. I saw him a bit and his standout quality is his finishing, he is a great striker at that level and could probably get a good share of goals in the Championship.

Of the youngsters released, the surprising names would be Jack Bainbridge and Delial Brewster (weirdly best mates from Southport apparently). Brewster in particular was a prolific forward at a younger age but he fell way behind in the pecking order and I think we might not even have Anthony Evans around for long. Best of luck to them all.

As for Kone, I wish him well; seems like a decent lad but decent isn't what we need anymore.

Did that include Eric Dier and Shkodran Mustafi? :-)

And that is not intended as a slight to them. Hopefully one or two can still carve out a career for themselves somewhere. Quite a number from the Everton academy do.

Conor is possibly one of the 'what if' stories. What if he hadn't broken his leg early in his loan at Brentford. Showed glimpses of his ability in (mainly) friendly games and has shown he can find the net in lower leagues?

Someone will pick him up, I'm sure. Good luck to the lad (and t'others).

Brian Wilkinson
11 Posted 09/06/2017 at 16:40:07
We all knew Kone would be leaving, just baffling why Ronnie still selected him in the last few games, instead of giving Lookman or even Sambou a run-out.
Thomas Surgenor
12 Posted 09/06/2017 at 16:55:39
Surprised at Duffus and Brewster. I haven't seen any of them live but there's been a bit of buzz on here about them in the past. Hopefully they rebuild and have a future in football. Good luck, lads!

Derek (#9) â€“ both of those were never released. One was a loan and the other was allowed to leave on a free transfer with IIRC a year left on his contract.

Incidentally, who is the last player we released that managed to build their way back to the Premier League? Danny Fox and Adam Forshaw are the two most recent in my memory.

I take your point but Dier and Mustafi are the exceptions rather than the rule. It's a tough world out there!

Sad about McAleny and a couple of the youngsters as they looked good prospects early on. Let's hope they find clubs where they can try to develop again and maybe get back to the Premier League.

Always a case of impressing as much as possible or having to make way for new players or others coming through. Let's hope quite a few of the U23s develop into great players.

I still cringe at that miss versus Hull. He got injured later in the same game, and that was almost it really. Apart from a hat-trick against Sunderland...10 goals in 60, for a Number 9... FFS.

Mike Berry
20 Posted 09/06/2017 at 19:32:43
McAleny is going to score a lot of goals albeit at a lower level. They loved him at Oxford, and will certainly help a team in their promotion challenge, I hope he has a really good career.

As for Kone, I wish him the best as I always thought he gave us his best, despite his terrible injury; maybe he will get one big last hoorah in China ? he could still knock a few in at the right level.

As for the youngsters released, I hope they have a future in the game and prove to be stronger and better with time. Good luck to them all.

Hope Akpan played for Reading last time they were up as well as the two you've mentioned.

James (#23) – I'd still like to see what Tarashaj can do, though I doubt he did himself any favors in Koeman's eyes with that nondescript loan spell in the Bundesliga.

[Thought I would lighten the mood a little.]

Jim Hardin
28 Posted 09/06/2017 at 23:10:00
Good luck to Kone. I didn't want him here initially, but he was a positive influence and gave what he had when on the pitch. Maybe he didn't put up the stats on the pitch but he made contributions to the squad in other ways by being a professional. Hope he has a season somewhere free of injury, just to close out his career on a positive note to offset the injuries.

As for McAleny, good luck to him too. I only was able to see snippets of him but he didn't impress me as possessing anything near the quality to displace any of the senior players. Hope he proves me wrong and just needed a long spell of starting and some self-confidence.

However, history has prepared me for the paradoxical inevitability that McAleny / Kone / A N Other ex-Everton player, will score the goal that knocks us out of the FA Cup or League Cup, at home, sometime in the next few seasons.

I've said on another link what was the point of constantly bringing on Kone instead of the likes of Lookman when it was obvious that he was gonna be out the door in a few weeks?

Having secured 7th, without realistically being able to get higher, surely it was the ideal time to give the youngsters more game time?

Still, to judge by his record at Oxford Utd, and what people have been saying about his performances there, I think we might hear a bit about him in the future. I wish him the best of luck.

Peter Gorman
33 Posted 10/06/2017 at 14:05:48
Steve, I might be wrong but, by the time Kone made the first of his late season cameos, Lookman was already in Japan with the other promising kids preparing for the world cup. Don't think it was ever a case of either or.

That said, I'd rather have seen any young player than Kone; nothing personal but, if he was not in the plans, why give him minutes as you say?

Andrew Grey
34 Posted 10/06/2017 at 21:50:12
I wonder how many of the English players released would have been if we still had the 3 foreigners rule? Mind you, we only had one sub then so maybe all of them! :)
Dave Abrahams
35 Posted 10/06/2017 at 21:56:56
Sam Byrne, the lad who came from Man. United has been retained. That seems strange to me, he has been here at least two seasons, has been injured a lot but doesn't seem to have made much progress. Maybe someone sees something in the lad?
Brent Stephens
36 Posted 10/06/2017 at 22:19:49
Dave, lI ast saw Sam Byrne at a game at Southport last season. Couldn't decide if he looked like a well-built old-fashioned center forward or was carrying too much weight!
Phil (Kelsall) Roberts
37 Posted 10/06/2017 at 23:53:02
I wish we could nail the Dier one once and for all. He was here on loan and went back to his club in Portugal. He was never our player who we released.

Kone had 2195 minutes on the pitch – which equates to 24Â½ matches – and scored 6 goals, one goal every 366 minutes. It is the rate of 9 goals a season. That would have put him top goal scorer in some seasons!

However, take away the 3 against Sunderland and it really is a very poor return from a striker.

And surely there must be a statement on Ross?

Everton apparently had the option to keep him but this story back in April suggested it was unlikely. If it were to happen, it would have to occur within the transfer window (like with Lukaku, and others previously).

Ross Barkley has, according to yesterday's Mirror, given a final rejection of his 𧴜k-per-week contract offer from the club. The club are unlikely to comment officially or make any statement unless something changes.

Brian Williams
44 Posted 13/06/2017 at 22:04:51
Saw that, Michael, but doubt the statement about him turning down the chance to become Everton's highest ever paid player @𧴜k per week, when Schneiderlin's allegedly on 𧴰k.
John Smith
45 Posted 04/07/2017 at 15:18:37
Arouna Kone joined Turkish club Sivasspor on a two-year deal. Sivasspor got promoted to the Turkish top flight.