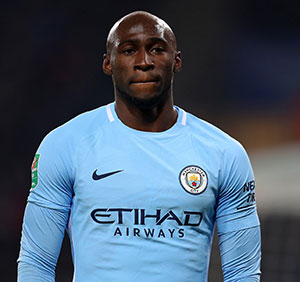 Eliaquim Mangala could arrive on loan from Manchester City today
Updated The winter transfer window closed at 11pm this evening with the temporary departure of Ademola Lookman the big surprise as Eliaquim Mangala was secured on loan.

More outgoings than incomings were expected from the club, with the day beginning with the confirmation of Sandro Ramirez's loan switch to Sevilla following a successful medical.

Davy Klaassen looked set to follow him out the door but a proposed move to Napoli collapsed late in the day. The Serie A club were initially reported to have gone cold on the move given that the Dutch midfielder would be cup-tied for the Europa League but it later emerged that a contractual issue related to image rights is what scuppered the deal.

Muhamed Besic, meanwhile, secured a move to Middlesbrough who decided to sign him on loan until the end of the season. U23s goalkeeper Louis Gray also went out on loan, to Carlisle United.

But the biggest story of the day was the apparent controversy surrounding Ademola Lookman, who forced a loan move to RB Leipzig in Germany, seemingly against the advice of the club and manager.

David Henen was wanted by Sunderland, but that deal fell through, according to La Dernière Heure because Everton demanded that Henen first extend his contract, but the player refused. When this season ends, he will be free to seek another club.

Sam Allardyce complained after the win over Leicester in the evening that five more of his players — later revealed to be loan offers for Phil Jagielka, Ashley Williams, Morgan Schneiderlin and Tom Davies and a cash bid for Oumar Niasse — were the subject of late interest from other clubs.

Another loan approach was reputedly made for Dominic Calvert-Lewin which was also knocked back.

In terms of inbound transfers, Mangala was the only signing, with Everton agreeing a loan deal for the Manchester City defender.

An offer for Blackburn Rovers' Callum Wright failed, with the forward opting for Leicester City while their interest in Charlton Athletic defender Ezri Konsa cooled with the London club asking for around £5m for the England youth international defender.

In later reports, it was claimed that Everton reportedly saw a late bid for Espanyol left-back Aaron Martin fail in the January transfer window. According to Catalan newspaper L'Esportiu, the Blues offered €20 million for the 20-year-old, around £17 million. Manager Quique Sanchez Flores was happy to sell but the club reportedly believed they could get €30 million for him.