Tosun focused on training and fitness 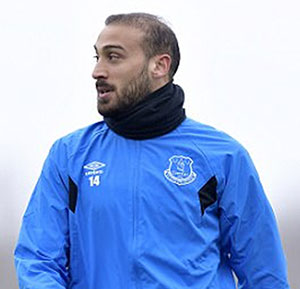 Cenk Tosun is hoping to use Everton's warm-weather training camp to increase his fitness as he bids to finally launch his Goodison career.

Billed by Sam Allardyce as the best striker in Europe in his valuation bracket when he signed last month, the striker has made just two starts and one substitute's appearance and failed to make it off the bench in either of the last two home games since arriving from Besiktas.

Allardyce elected not to bring him on with the Blues 3-0 up on Crystal Palace last Saturday, a decision that was met with boos from the home faithful, with the manager insisting that Tosun is struggling with the pace of the English game.

Tosun appears relaxed about what he needs to do to earn his chance, however, and has an opportunity over the current break from action to gel with his team-mates and further improve his physical conditioning with the team in the Middle East.

“I am in a completely different league,” Tosun explained to turkish-football.com, “[but] I'm doing everything to settle in and bond with my new teammates.

“I did not play in the last game but it does not bother me. I am just focused on my game and training hard.

“I am going to be a lot fitter in a fortnight's time and then return to the starting 11.”