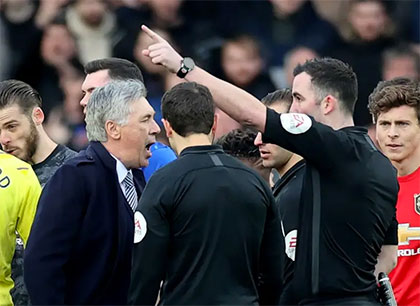 Everton were held to a 1-1 draw in a game that ended in controversy and Carlo Ancelotti being shown a red card at the final whistle after the Blues were denied a dramatic injury-time goal.

Jordan Pickford had atoned for another error at one end to keep the scores level before the home side attacked at the other and appeared to have grabbed the points when Dominic Calvert-Lewin's shot was diverted past his own goalkeeper by Harry Maguire.

Match official Chris Kavanagh initially allowed the goal despite and consulted with his linesman but the decision was ultimately taken 200 miles away in Stockley Park where Video Assistant Referee, Jon Moss, ruled it out for offside given that Gylfi Sigurdsson was sitting in an offside position.

Ancelotti was incensed and remonstrated with Kavanagh on the pitch after the match was over and was sent off for his troubles.

Everton had got off to another terrific start, scoring very early for the second week running when Calvert-Lewin charged down David de Gea's attempted clearance and blocked the Spaniard's kick into the net with just two minutes gone.

And the striker, who turned in a man-of-the-match display overall leading the line in impressive fashion, almost doubled the lead a minute later when he raced into Michael Keane's raking ball over the top but De Gea finger-tipped his shot wide.

The Toffees failed to build on that early platform, however, United came back strongly with Nemanja Matic thundering a shot off the crossbar from 25 yards and then missing narrowly after Fred had evaded Leighton Baines down the United right to cross dangerously.

Mason Greenwood headed another centre over the bar before United levelled as Everton's attempts to play their way out from the back failed. Djibril Sidibé, on as a substitute for the injured Seamus Coleman just three minutes previously, missed Theo Walcott with a loose pass and the ball was worked to Bruno Fernandes. The Portuguese had time to measure a shot and lash it home from distance with Pickford failing to get across quickly enough for an effort that looked well within in his grasp.

It was Everton who went closer to scoring just before the break, though, when Baines whipped in a great cross and Richarlison stepped in ahead of Luke Shaw at the far post but could only get a glancing touch on it, not enough to steer it home.

The hosts were able to nullify much of the visitors' sharp passing in the second period and that allowed Ancelotti's men to grow back into the contest and they almost reclaimed the lead when Victor Lindelof tripped Calvert-Lewin on the edge of the box. Sigurdsson came within a few inches of finally scoring a direct free-kick in Everton colours when his curling shot came back off the post and Richarlison could only stab the rebound wide.

Sigurdsson had another chance from a similar position 15 minutes later but couldn't clear the defensive wall with his shot before Everton began amassing in impressive tally of corners as they tried to press home an advantage in the final 20 minutes.

United repelled most of them fairly comfortably and then almost stole victory in the 90th minute. Fernandes popped up in the box and tried to side-foot into the top corner but Pickford pawed it into the air where Odeon Ighalo, recently on as a sub, looked certain to score until the keeper blocked his goalbound shot with his foot to divert it behind.

It was the Blues who came forward in the second minute of stoppage time searching for a winner as Bernard clipped a great ball into the box to find Richarlison who delayed long enough to knock into Sigurdsson's path but his shot was saved on the line by De Gea before the Icelander was cleaned out by Aaron Wan-Bissaka's desperate lunge .

The ball came back out to Calvert-Lewin who took a touch past his man, fired a shot goalwards that deflected heavily off Maguire inside the corner. Goodison erupted but then had its emotion killed by the inevitable VAR check which, somewhat predictably ended with winner being chalked off even though Sigurdsson didn't touch the ball and wasn't obstructing the keeper's line of sight.

The result means that Everton have taken just one point from six from the last two games and remain outside the top half, albeit just five points off the top six for the time being.