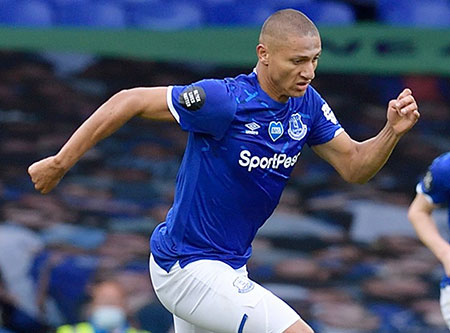 Everton settled for a point against Southampton following another flat performance that effectively puts paid to their dwindling European hopes.

Richarlison scored a brilliant equaliser just minutes after the Blues should have had a penalty for a foul on Anthony Gordon but, having restored parity and given themselves a platform from which to build for the second half, Carlo Ancelotti's side couldn't find the drive or invention to go on and win.

Featuring two changes from the team that had been so abysmal at Tottenham on Monday, Everton were fortunate not to go 1-0 down inside the first 10 minutes when Stuart Armstrong turned Che Adams's shot home from close range but the Saints midfielder was flagged offside.

A good move by the visitors after a quarter of an hour caused more problems for the hosts but successive defensive blocks kept Jordan Pickford's goal from danger before Everton finally went close themselves at the other end.

The impressive Gordon combined well with Lucas Digne and when the Frenchman crossed towards the back post, Alex Iwobi chested the ball down and fired goal-wards but his effort was parried behind by Alex McCarthy.

Yerry Mina's clumsy foul on Danny Ings gave James Ward-Prowse an opportunity with a free-kick but his shot was palmed over by Jordan Pickford and from the resulting corner, the England ‘keeper somehow kept Ings's glancing header out, batting it off the woodwork and then to safety.

Southampton remained on the attack, however, and when Ward-Prowse fell into André Gomes's leg, referee Lee Mason, in shocking form all evening, pointed the spot, his decision to award a penalty upheld by Video Assistant Referee, Andy Madley.

Justice was done when Ward-Prowse hammered his penalty off the crossbar but it proved to merely be a stay of execution for the Toffees who were undone by Ings four minutes later.

The striker was found too easily in a large space in the box where he did enough to wrong-foot Pickford and stab the ball into the empty net from a couple of yards out.

Everton thought they had a route back into the game three minutes later when Gordon was barged over in the Saints area but Mason waved play on and the VAR backed the match official once more.

A minute before the end of normal time at the end of the first-half, however, Ancelotti's men did fashion an equaliser thanks to supreme vision and execution from Digne and Richarlison.

The fullback picked the Brazilian out with a pin-point, raking pass from the left flank than the latter controlled and despatched over the advancing goalkeeper and into the net from the edge of the box.

With Gomes already forced off through injury and replaced by Gylfi Sigurdsson five minutes before the interval, Ancelotti made a further change at half-time, replacing Iwobi with Djibril Sidibé but it was Southampton who continued to look the more coherent and dangerous of the two sides.

Adams forced a save from Pickford less than 30 seconds after the restart and the Blues defence eventually hacked the ball away from a lengthy goalmouth melée a few minutes later before a lovely floated ball by Tom Davies presented Dominic Calvert-Lewin with a gilt-edged chance to put Everton ahead but he mis-judged its flight and it bounced away off his hip with the ‘keeper stranded.

Digne and Ward-Prowse fired free-kicks off the respective defensive walls and Sidibé's shot was comfortably dealt with by McCarthy before the game lapsed into a pedestrian lull for the final half hour, but only after a moment of controversy in the 61st minute. Bednarek was adjudged to have fouled Richarlison as the last man but the referee elected to only book the defender rather than send him off for denial of a clear goalscoring opportunity.

Armstrong had a chance to win it late on for Southampton but blazed over when well placed and the match petered out to an unsatisfactory conclusion with the spoils shared.

Everton remain in the bottom half, four points adrift of Burnley and Tottenham ahead of them and six points behind Sheffield United in seventh place with four games to play.