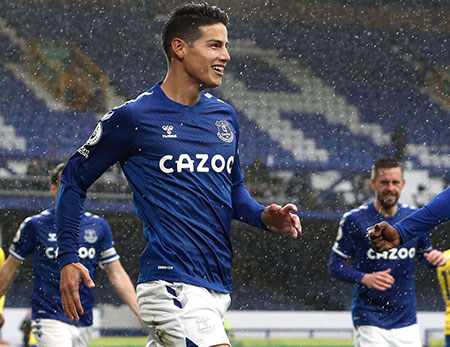 Everton made it four straight wins to start the Premier League season as they rattled in another four goals to see off an enterprising but ultimately helpless Brighton side.

Dominic Calvert-Lewin scored again, James Rodriguez weighed in with an important assist late in the first half to steady the ship following another Jordan Pickford howler and then grabbed his first brace in English football to put the Toffees 4-1 up before Yves Bissouma's cracking consolation goal in stoppage time.

Carlo Ancelotti was again forced to make changes because of injury as first Richarlison and then Seamus Coleman limped out of the action but his Everton side shrugged off the set-backs to go back to the summit of the table for the time being.

Already without Allan who picked up an injury in the midweek cup win over West Ham, the Italian deployed Tom Davies in the disruptor role in front of the back four in the Brazilian's place while restoring Yerry Mina to centre-half, moving Lucas Digne back to left back and swapping Fabian Delph for Abdoulaye Doucouré in midfield.

Everton made a strong start, with Coleman and Calvert-Lewin forcing early saves from Matt Ryan but then made the breakthrough with a quarter of an hour on the clock. A short corner routine involving James and Gylfi Sigurdsson saw the Icelander swing a deep cross that was met by a towering Calvert-Lewin header at the back post.

Unfortunately, Richarlison, who passed a fitness test to play despite sustaining an ankle knock on Wednesday, had to come off midway through the first period after a heavy tackle by Tariq Lamptey to be replaced by Alex Iwobi but Everton were comfortable until Pickford's latest error gifted the Seagulls an equaliser.

Leandro Trossard's mis-hit half volley looked to be an easy claim for the England international but he failed to catch it, dropped it at the feet of Neal Maupay and the Brighton striker held him off to fire it through Michael Keane's legs on the line.

The visitors briefly threatened to turn the match on its head as half-time approached but James's quality put the Blues back in front in time added on. The Colombian clipped a perfect free-kick into the six-yard box where Mina nodded emphatically home to make it 2-1.

Everton's relentless pressing had resulted in a third goal seven minutes after the break. Rodriguez cut out an attempted pass out to Brighton's left flank, the ball was worked by Calvert-Lewin to Iwobi who centred to find the No.19 arriving at the back post and he swept the ball home.

Graham Potter's men remained unbowed throughout and they had a flurry of chances around the hour mark that the hosts successfully repelled. Solly March's low cross in sodden conditions was almost turned into his own net by Sigurdsson, Mina cleared one cross from under his own crossbar and Davies made an excellent block to deny Maupay from a central position.

Shortly after that, Everton made it 4-1 with a similar move that had yielded their third. This time Iwobi fed Doucouré with a lovely pass and the Frenchman cut it back across goal to find James arriving again and he effected another confident finish.

Brighton controlled the last 20 minutes trying to find a way back into the contest and it took more fine defensive work by Mina in particular to divert shots by Webster and Trossard before Bissouma controlled a ball outside the box with his chest and smashed a volley into the corner of Pickford's net.

The victory marked Everton's seventh in a row, the first time they have won their first seven matches in all competitions since 1894 and it takes them into the first international break on the highest but most unexpected of highs.