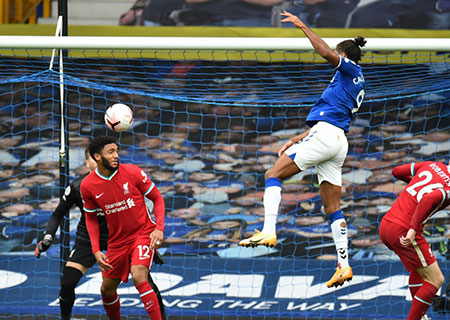 Everton's 100% record fell at the fifth hurdle in the 237th Merseyside derby but, by the final whistle, they were counting themselves fortunate to have come away with a point after Jordan Henderson's stoppage-time winner was ruled out for offside by the slenderest of margins by Video Assistant Referee, David Coote.

The Blues had twice come from behind thanks to Michael Keane's header from a corner and another prodigious header from Dominic Calvert-Lewin, and were seeking a late winner of their own when Richarlison inexplicably clattered through Thiago Alcântara, injuring himself in the process and earning a straight red card, and the visitors thought they had taken advantage, only for VAR to come to intervene.

The vagaries of VAR and when replay reviews can be applied had come to Everton's rescue early in the first half when Jordan Pickford was fortunate not to have been sent off himself for barrelling through Virgil van Dijk and prompting the Dutchman's withdrawal from the contest with a damaged knee. Carlo Ancelotti's side failed on the whole to unduly trouble the reds' weakened back line, however, and had to chase the game from behind until Calvert-Lewin levelled things up again with 10 minutes to go.

The last three Goodison derbies had ended goalless and the one before that was only settled deep into stoppage time by Sadio Mané but any chance of another blank scoreline went when Liverpool swept into an early lead. Needing to react positively to their humiliation at Villa Park before the international break, Jürgen Klopp's side put together a rapid passing move that carved the Blues open and ended with Andrew Robertson crossing from the left and Mané crashing the ball into the roof of the net with just two minutes gone.

It was the worst possible for start for the League leaders but they equalised in the 19th minute from a corner after Adrian had parried Calvert-Lewin's fierce drive behind. James Rodriguez whipped the resulting set-piece into the six-yard box and Michael Keane powered home a header off the keeper's gloves.

Liverpool came back at Everton, however, and Pickford denied Trent Alexander-Arnold with a tremendous flying save after André Gomes had been penalised for a high foot just outside the penalty area, Alcântara fired narrowly wide, and, after Seamus Coleman had been forced off with a recurrence of his hamstring problem and replaced by debutant Ben Godfrey, Mané sliced an effort well off target.

Liverpool came out of the half-time interval on the front foot once more and saw drives by Fabinho and Henderson fly over the bar before Everton enjoyed a promising spell of their own. Calvert-Lewin almost got a touch on Lucas Digne's tempting cross, James picked Richarlison out with a brilliant ball but the Brazilian's header came back off the post and Adrian pushed a shot from the Colombian away to safety.

It was Liverpool who scored next, however. Yerry Mina cut out a cross from the right but could only give it straight to Mohamed Salah and he hammered a first-time shot inside the far post to make it 2-1 with 18 minutes to play.

Five minutes later, they went close to extending their lead but though Joel Matip rose unmarked to meet a corner from the reds' right, Pickford leapt to his right again to pull off a one-handed save and provide the platform for Calvert-Lewin to make it 2-2 at the other four minutes after that.

Digne scampered down the left and delivered another of his excellent crosses that Calvert-Lewin met with what is becoming a trademark leap before guiding a header back across Adrian and into the far corner.

Pickford denied Mané once more in the 83rd minute with the points there for the taking and after Richarlison had received his marching orders for that ugly challenge on Alcântara, the Blues' keeper looked as though he had ruined a good performance with a weak attempt to keep Henderson's shot out. His England team-mate's side-foot finish off another cut-back from the left from Mané spun off Pickford's palm and over the line. Mané, however, was adjudged to have been offside and the goal was chalked off.

So, Everton's wait for a derby win will stretch into another year and Ancelotti will know that his team could have played much better but the draw at least preserves their unbeaten start to the campaign and avoids another painful defeat at the hands of the neighbours. However, the Toffees may count the cost of Richarlison's impending three-match ban.