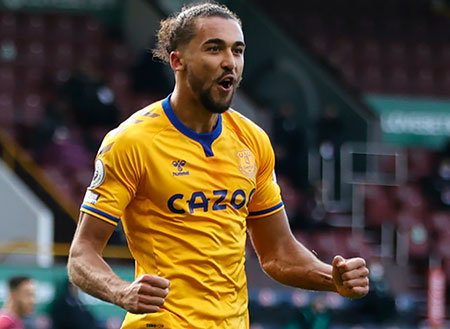 Everton passed up a great opportunity to move themselves into fourth place for the time being with what would have been just their second win in seven games but they couldn't find the quality to edge Burnley.

Having worked their way back into the game after conceding very early to Robbie Brady's strike, the Blues had set the table to go on and win the game in the second half but a lack of consistency and cutting edge combined with two crucial saves from Nick Pope consigned them to a disappointing draw.

Everton had to be thankful to Jordan Pickford at the other end for making a couple of key stops himself, not least to prevent Chris Wood from putting the Clarets 2-0 ahead and despite his side's relative ascendency after half-time, Carlo Ancelotti could have few complaints about the result.

With both of his first-choice full-backs out injured, Ancelotti again resorted to a back five, this time with Fabian Delph in the left wing-back role with Alex Iwobi restored to the opposite flank where he had been so effective against Fulham. Yerry Mina came back into the middle of defence, this time at the expense of Mason Holgate, while the rest of the side was unchanged.

The visitors had barely had time to settle before they fell behind, though. Allan's loose pass inside to Abdoulaye Doucouré was intercepted by Lee Westwood and when he moved it on to Brady, the Irishman lined up a shot from 20-plus yards that arrowed into the far corner past Jordan Pickford's despairing dive.

Everton began to settle and find some rhythm and were almost level 10 minutes later when Iwobi found Dominic Calvert-Lewin with a cross from the right but Nick Pope in the Burnley goal was positioned well to block his effort from close range and the England international keeper was also on hand to stop a low drive from Richarlison a few minutes later.

Delph's afternoon ended before half an hour had elapsed when he pulled up with a hamstring injury and was replaced by André Gomes, a change that saw Ben Godfrey move over to the left but the hosts came very close to doubling their advantage five minutes before the break.

Wood won a header from Pope's punt forward that dropped to Dwight McNeil and he slipped the striker in only for Pickford to come off his line quickly to save well with his foot.

In stoppage time, however, Everton grabbed the equaliser. Allan robbed Westwood in midfield and fed the ball to Richarlison who crossed invitingly across goal for Calvert-Lewin to slide in and guide the ball over the line.

Things looked positive for Everton early in the second half when Richarlison had an early effort blocked and James Rodriguez produced a fine save at full stretch from Pope with a trademark left-footed shot from the edge of the box.

All to often, though, the Toffees' attacks broke down in the final third and instead it was Burnley who threatened next with 12 minutes left as Josh Brownhill's shot deflected just wide off Calvert-Lewin following a free-kick and Pickford pulled off another great stop to deny Wood's header from a corner.

The best chance of the half fell to Everton in stoppage, however, when James produced a moment of magic to nutmeg a defender and slide substitute Gylfi Sigurdsson in for a gilt-edged chance but his shot was too close to Pope and the keeper saved with an out-stretched leg to ensure it finished 1-1.

Ancelotti's side have now in just once in seven games and head into a run of four very difficult fixtures needing to significantly raise their intensity and game if they are to remain in touch with the clubs at the top of the Premier League table.