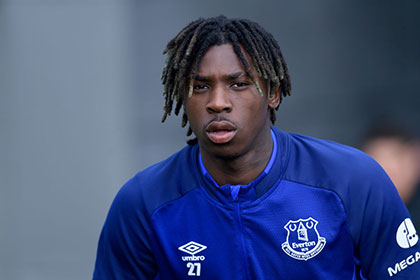 Confirmation that Everton have concluded a deal with Juventus in which Moise Kean returns to the Serie A club on a two-year loan with an obligation to buy.

"He is back home, and we are ready to welcome him back with great pleasure," Juventus said.

Kean was signed by Everton to much fanfare in the summer of 2019 for £25m but he endured a difficult start to life in the Premier League as Everton themselves struggled under then-manager, Marco Silva.

He wouldn't score his first goal for the club until February 2019 under Silva's successor, Carlo Ancelotti, but even under his compatriot, Kean wasn't able to make sufficient inroads into the first team and he was eventually loaned out to Paris Saint-Germain last season.

A successful campaign that yielded a healthy goals return and plenty of Champions League experience looked to have earned the Italian international a permanent move to Paris but PSG refused to make Everton a cash offer, preferring instead to take him on loan again.

The Blues rejected that proposal but, with Kean seemingly unhappy in England and Everton in need of funds for transfers, the decision was taken to allow the player to return to Juventus on loan after all as long as there was a purchase obligation at the end.

Although according to the BBC, it’s an obligation to buy, meaning they are obliged to buy him, not an option for them. All-in-all, seems a good deal with a small profit on him.

Yes, it is a good deal. I was reading only BBC statement first which stated option to buy instead of obligation to buy.

Looks as if we just concentrated on getting him off the books with minimal profit.

Most importantly, I don’t have to care any more.

Get Rondon in now.

Probably involves us paying some of his wage for the next 2 years at which point he would enter the final year of his 5-year contract. Then he can negotiate his own contract with Juventus from that point onwards.

But, as far as he's concerned, he's still going to be getting his full wage.

Financially it must make sense; otherwise, we wouldn't do it as he has plenty of time left on his contract.

Shame it never worked out. There's obviously a very talented player there but one who does need to mature and he will probably do this more successfully playing for a bigger club, with better players in a country that he calls home.

I still think that it is commendable that we got this deal to bring him to Everton done. But again, shame it didn't work out.

Hopefully this will free up some space to bring someone in.

Goes down on the "failure" side of our recruitment spreadsheet, but at least we should (eventually) recoup our outlay.

We desperately need to get James off the books today and a couple of incoming at right back and centre forward or, despite the unexpected success of Gray so far, it's been a pig of a transfer window.

Pat Kelly
15 Posted 31/08/2021 at 08:59:19
The obligation to buy is "subject to the achievement of certain given sporting objectives by end 2023". No indication of what they are. If Kean doesn't perform are we still stuck with him. Looks like all the risk is on us. And the purchase fee, if it happens, is to be paid over 3 years.
Paul Birmingham
16 Posted 31/08/2021 at 09:04:48
Hopefully this transaction will be good for all parties and Everton recouping their initial outlay and a bit more on this player.

Player chemistry is key in any Team, and Moise in my opinion after his I:initial couple of starts didn’t want to be here.

Let’s move on and see what the hours left in this transfer window bring to Everton.

Simon Jones
17 Posted 31/08/2021 at 09:47:13
Presumably these sort of loan deals with option or obligation to buy will become more common as more clubs butt up against FFP regulations? I have no special insight, but more and more clubs have huge debts. Have a look at what @SwissRamble posts on Twitter, some of the figures are eye-watering.

Football is a million miles away from its roots.

A 2-year loan just adds to the absolute pathetic transfer dealings we are known for. This helps Juve move than helping ourselves. I wouldn't be surprised to learn we are paying for his wages and the agreed fee is negotiable if they want to lower it.

However, we now need some better attacking options, wingers, strikers and attacking midfielders.

If we can loan a few players all the better.

We can all remember how the Turks (Fenebache?) tried to renegotiate the terms for the Yobo loan to buy. We ended up not selling him for the agreed amount. I really wouldn't be surprised if the same happens here again.

If the deal is a good one then they should make the details transparent otherwise we're obviously going to be suspicious. Especially if no senior striker comes in as a replacement.

"How can we lose money on a young, improving, season of Champions League experienced player?"

He had a reasonable season at Juve then was binned by Italy after stinking the place out here after being a squad player at PSG. No-one wanted to part with a bean for him. "Improving?" – laughable.

Peter Gorman
29 Posted 31/08/2021 at 17:09:04
Don't let the door hit your arse on the way out, Moise.
Tommy Leigh
30 Posted 31/08/2021 at 17:34:21
Good riddance I say. Never looked like his heart was in it. Seemed to have quite a bad attitude and generally did not look like a decent player to me, at all. Arrivederci e buona fortuna.
Chris Gordon
31 Posted 31/08/2021 at 17:40:33
Loads of potential talent, however a galactic sized ego that far outweighs his current talent. Good ridence to a disruptive influence. Essentially the deal seems to be an agreement to buy in 2023 with the player loaned until then?
Brent Stephens
32 Posted 31/08/2021 at 18:31:01
Kean unfortunately hasn't been able to deliver at Everton. So £6m a year for the next two seasons (and his wages paid by Juve??), with a possibility of another £24m at the end of that is not bad at all, given that we paid "only" £25m for him. With him being on a five-year contract with us, and if things don't work out for him at Juve, then we only have to deal with his final year with us. Would love to know what the conditions are for this to become permanent.

Another €3M in bonuses also included in the deal, but conditional on targets.

So yes a decent deal.

I’d understood the transfer deal was firm, but the bonuses are conditional. But I expect we’ll see it in a bit more detail tomorrow.

Juventus and Italian clubs do this for a few reasons. The first is a historical approach to amortisation and how they account for footballers as an asset on their balance sheet. A loan deal does not appear on the balance sheet as a declining asset and gives the appearance of a 'better' balance sheet. As Italian clubs are Società per azioni (often seen as S.p.A.), the equivalent to a PLC, they have an obligation to disclose their accounts and to make them look as tidy as possible.

The second is FFP. Loan deals ensure the fee is effectively spread out over a wider period.

The only important thing for most people to note here is that Everton will be receiving (£30m/€35m) by the time the deal is completed. This marks a good profit for our club as we paid €27.5m for him (his agent made €5m from this deal) and he did not reach his bonuses. We did not receive loan for his spell at PSG but they did take the entirety of his wages.

In the end, Everton paid a year of his wages and made €7.5m profit for having him on our books.

Bill Watson
37 Posted 01/09/2021 at 12:04:35
Those who are castigating Brands over Kean are probably the same ones who were applauding the club for signing what was, at the time, a player who was seen as one of the best young talents in Europe.

It didn't work out as planned and Kean, like many others before him, was unable to adapt to the pace and physicality of the Premier League. OK, so he scored around 16 goals for PSG but he was being serviced by great players in a weak league.

In the circumstances (Covid etc) I think the Kean outcome is a good deal; we paid £25m and this deal pays £6m in loan fees and a potential £24m transfer fee. Add in the loan fee from PSG and we've made a profit even after taking his wages into account.

Thrown into a high profile transfer at the age of 19, joining a club that then went through a period of turbulence to be polite. To flip the argument that some accuse others of favouritism to continental or international players with exotic names, if he'd be Mike O'Kean from Kirkby, we'd have had more patience with him. He's a kid and still developing. And he will do in my opinion.

Good article on the Athletic here:

Great management by Duncan. Kill time? Straight out of the Sam Allardyce school of management. I won't say this often and will go and wash my mouth out with soap immediately, but good comments from Carragher.

This lad will be a top talent. The timing wasn't right for him and Everton, but I see this as an opportunity missed. Talking of quality Italian players and Everton, I see parallels with Materazzi. World Cup winner. Just wasn't the right timing for him or us.

He's back at the Old Lady, where he feels he belongs. But he's technically still an Everton player. Still time and opportunity for him to come back to the Grand Old Lady?