Broadhead on song but injured again 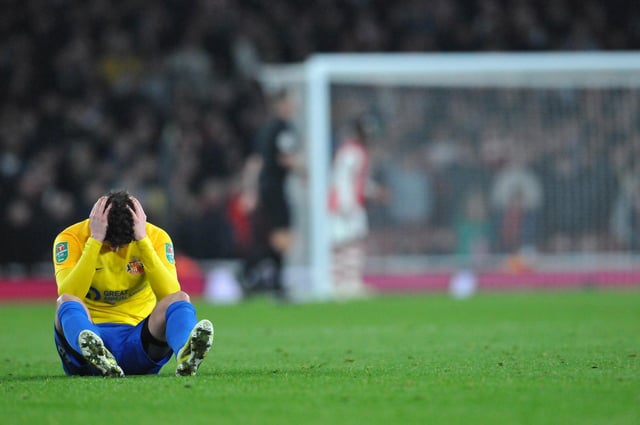 Nathan Broadhead, head in hands after suffering another hamstring injury at The Emirates on Tuesday night

Nathan Broadhead's stop-start career seems to have been bedevilled by injury spells, the latest one coming this week after he hit a rich vein of form, scoring five goals in his last four games for Sunderland, where he is on a season-long loan.

The 23-year-old Everton Academy product has suffered a number of repeated injuries, the latest is another hamstring injury that is concerning as it follows on from an earlier injury this season that kept him sidelined for seven games.

The Wales youth international broke through into David Unsworth's title-winning Under-23s side back in 2017 and got his senior debut as a sub against Apollon Limassol in Cyprus that year. But in the 4 years since then he has featured for the Everton senior side only once more when he came on as a sub in a Premier League game last season under Carlo Ancelotti for a few minutes against Brighton.

Nonetheless, he was given a new 2-year contract by Everton after Ancelotti had departed, but before Rafael Benitez was appointed. In pre-season, Broadhead traveled to the USA with the new manager and senior Everton squad to win the Florida Cup, and was on the bench for the first game of the new Premier League season against Southampton before he moved on loan to Sunderland.

Sunderland were competing in the Quaterfinals of this season's League Cup on Tuesday where they came up against Mikel Arteta's Arsenal and were soon chasing the game, two goals down in the first half-hour. Bu Sunderland hit back when Nathan Broadhead coolly clipped over the onrushing Bernd Leno from a superbly-weighted pass.

But that goal would prove to be only a consolation in a thumping 5-1 defeat that would get worse for Broadhead and Sunderland when he had to be substituted just before half-time with yet another hamstring injury sustained as he went to ground under pressure from Gunners defender Rob Holding.

Manager Lee Johnson called it 'a disaster' for the Black Cats and has hinted that he will be looking to replace Broadhead when the transfer window opens, suggesting that the injured player could return to Everton for his recovery and recuperation, cutting short the loan agreement.

"It's a disaster," said Johnson, who confirmed it was not a recurrence of the hamstring trouble that kept him out for the whole of October.

"It's his hamstring, the other one. I don't know if I've run over a black cat or what."

A scan would later show the extent of the damage and there were suggestions that Broadhead could be out for at least 3 months — if not the rest of the season.


Tony Abrahams
1 Posted 23/12/2021 at 09:58:51
Just starting to get in the groove playing for a proper football club. It’s obvious that Broadhead has got a lot of ability, but what is not so obvious, is the level he will eventually reach?
Robert Tressell
2 Posted 23/12/2021 at 10:08:48
Tony, I'd have guessed he's now found his level or thereabouts. Anyone making their breakthrough age 23 in the third tier seems unlikely to shine in the Premier League.

A few late bloomers do emerge but really the statistics are very much against Broadhead.

But for him being on our books already, I don't think we'd be interested in a 23-year-old uncapped Welsh player, currently sitting 44th in the third tier scoring charts (albeit having played fewer games than many).

Dave Abrahams
3 Posted 23/12/2021 at 10:11:09
Injuries have interfered with his progress throughout his career and have obviously kept him back, to what extent nobody can say but he has an eye for goal, decent pace with good control of the ball and can spread it around, maybe the special thing he needs is luck.

Michael, I might be wrong but didn't he come on as a sub. in the game when we played a team from South Africa and scored a good goal at Goodison Park in a 4-0 win I think, this was classed as a first-team game.

Tony Abrahams
4 Posted 23/12/2021 at 10:17:13
All good points, Robert, except for the fact that he his on our books, but I honestly wasn't even thinking about Everton, I was just thinking about a kid with talent, who might just become a very good player if he can play consistently without getting these little debilitating injuries, every time he looks like he's getting into the groove.
Michael Kenrick
5 Posted 23/12/2021 at 10:23:27
Dave, the Elephant Man (in terms of memory, rather than any other physical characteristics... just saying) strikes again!

The SportPesa Trophy! Kariobangi Sharks 1 - 1 Everton. Broadhead came on for Lookman after 15 minutes and played the rest of the game, scoring for Everton 'first team' in the penalty shoot-out.

However, it was a friendly, Dave, rather than a truly competitive professional game (an 'Exhibition game' as the Yanks would say) and they don't count towards official player stats, despite the massive turnout – 64,829.

Oh, and in the interests of true nit-picking pedantry, it was Kenya, not South Africa, and the score was 4-3 (not 4-0) in the shoot-out. Close… at least half a cigar.

Gotta love this perceptive claim from another of those stoopid clickbait sites:

"Benitez could save Everton millions by recalling forward Nathan Broadhead from his loan spell with Sunderland to improve his attacking options."

Dave Abrahams
6 Posted 23/12/2021 at 11:42:14
Michael (5), No Michael I got it completely wrong, I was thinking of the game at Goodison Park which did finish 4-0, there was no penalty shoot out. I thought Broadhead came on near the end and scored his goal.

Not many tickets had been sold for this game but there was a good turn up on the night and it was great to see so many smiling fans from Africa or Kenya at the game.

Maybe it was a return game, it was a night game during the early part of the season.

Ollie Watkins, Patrick Bamford and Ivan Toney are another 3 that spring to mind that are currently doing well in the PL.

Ability and desire Andre clearly needed, as is luck (with injuries, and with the coaches you're given).

Broadhead seems to have lacked very much in the luck side of things.

re-live the excitement through the link below

I think Broadhead made his debut for us against Apollon Limassol and set up the third goal (Vlasic) in a 3-0 win.

Peter Gorman
12 Posted 23/12/2021 at 13:59:49
Minik - Hornby is currently on loan at Aberdeen from Reims. Not sure how well he is doing or what position he is playing but he doesn't appear to have yet scored for them.
Dave Abrahams
13 Posted 23/12/2021 at 14:22:07
Peter (11), thanks Peter, I remembered the night because I took my young great grandson and he became a big boy because I let him go and sit with his school mates in the Stanley Park End where I don’t normally sit and picked him at the end of the game.

Where about were this team from, they are different to the team Michael has described but I know they brought quite a few supporters with them and they really enjoyed themselves during and after the game in a very happy way.

I remember I wrote a post on ToffeeWeb after I got home from the game.

I'd respectfully challenge Michael's claim that it was only an exhibition match as I am counting the Everton wins as our last bit of silverware, which I've no doubt sits proudly in the cabinet next to the Roar Against Racism cup we won in 2010 against Brisbane.

Dave Abrahams
19 Posted 23/12/2021 at 19:07:34
Peter (18), yes I’ll second that challenge, a cup is a cup and we had to travel all the way to Kenya and play in scorching heat against eleven determined Kenyans who were roared on by over 64,000 fanatical fans!!
Mike Gaynes
20 Posted 23/12/2021 at 19:26:31
Dave and Peter, highest respects (and abiding envy) for your powers of recollection. How you recall those individual games and the names of those obscure cups is beyond me.

I write this as I am looking for my phone. Again. Last time my wife found it in the bathroom.

For many, many years, I never heard my wife swear. Perhaps she did it under breath, which I suspect many wives do. However, she is quite open about it now.

I have also noticed a worrying reduction in the subtlety of her body language, which, frankly, was not even remotely subtle on our first date.

And them's not my rules, Peter (@18); even if there's a tin pot involved, nobody counts those games towards a player's appearances or goals stats.

I wonder if the MLS All-Stars Cup from 2009 is in there? The only trophy won by that 'great' manager we had for far too long...

Dave Abrahams
25 Posted 24/12/2021 at 11:37:43
David (24), thanks for that you’ve just nudged my memory and I’ve remembered someone who did, too late, the bastards gone now!!
Bobby Mallon
26 Posted 24/12/2021 at 14:40:31
Peter 11 good link. Lookman miserable got even scoring.
Dave Abrahams
27 Posted 24/12/2021 at 14:53:27
Bobby (26), Bobby no wonder Lookman looked miserable that night, Tosun never stopped moaning at him for minutes on end because he never passed to him when he was in a decent position, and have a look at the state of Tosuns head, this was before he bought the Irish jig !!
Dave Abrahams
28 Posted 28/12/2021 at 10:35:04
The injuries that have marred Nathan’s career carry on with the Sunderland manager saying his latest injury is a bad hamstring injury which will keep him out for at least three months and quite possibly the rest of the season, I hope for the lads sake he gets back a lot sooner.