Wolves do a professional job on toothless Everton 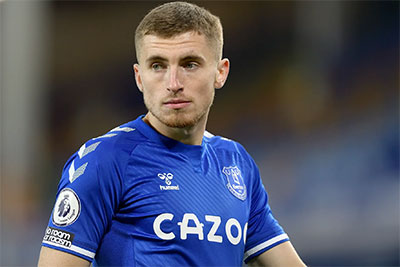 Everton remain entrenched in a battle for Premier League survival after losing for the 15th time in 19 games thanks to a Conor Coady goal scored early in the second half.

The Blues finished the game with 10 men after Jonjoe Kenny's rash tackle in Raul Jimenez earned him a second yellow card but Frank Lampard's team looked beaten well before the defender received his marching orders from referee Michael Oliver.

The manager had rung some changes in his starting XI by dropping Michael Keane and Allan to the substitutes' bench and drafting in Vitalii Mykolenko, Ben Godfrey and Demarai Gray while Dominic Calvert-Lewin was forced to sit out due to illness.

However, after an energetic start that was disrupted by the protracted substitution of Hwang Hee-chan, Everton soon lost their way against a very well-organised and smooth Wolves outfit who weathered the early storm from the home side and took control of the game but without every really looking likely to run away with it.

Richarlison had had a couple of early chances, the first an ambitious 25-yard half-volley that dropped wide and then another effort that was blocked behind well by Jose Sa in the Wolves goal following a sumptuous ball over the top for the Brazilian by Mykolenko.

Gray was then played in at the far post on the other side from a cross by Seamus Coleman after another nice chipped ball down the line, this time from Anthony Gordon, but Sa was equal to it again.

Wolves had started to get the measure of their opponents but didn't make Jordan Pickford work until Daniel Podence's shot deflected off Mason Holgate before the keeper saved well from Jimenez but the officials pulled the play back in any case for a foul by the Mexican on Mykolenko.

Jimenez would have the last chance of the first half, an acrobatic overhead kick that flew well over but Wolves would take the lead early in the second half following successive sloppy fouls by Everton's full-backs, the latter by Kenny on Leander Dendoncker.

Richarlison initially headed the free-kick away but insufficient pressure was exerted to prevent Ruben Neves from swinging in a cross that Coady simply had to guide past Pickford with a well-placed header.

The visitors almost doubled their lead four minutes later when Jimenez swept a Joao Moutinho free-kick narrowly wide of Pickford's left-hand post and Podence went close with a low shot while, at the other end, Gordon continued to lead the charge for Everton and his whipped cross was headed off the woodwork by Richarlison but was adjudged to have been offside regardless.

Lampard withdrew Mykolenko for Dele Alli with an hour gone in an attempt to try and coax some attacking threat and fluidity out of his side but the Blues remained depressingly impotent moving the ball through midfield.

Richarlison was again put into a dangerous position, this time by Dele, but was, again, ruled fractionally offside and Sa had taken the ball off his toes anyway as the forward tried to round him on the way to goal.

The Brazilian despatched a snap shot into the side-netting off a Gray pass before the latter was replaced by Andros Townsend but what chance there was of Everton salvaging anything from the match evaporated when Kenny committed his second bookable offence.

Francisco Trincao had a late chance to rub salt into Everton's wounds with a curling effort from just outside the box that drifted wide while Townsend was handed the chance to be a last-ditch hero but he missed the target with a direct free-kick after Moutinho had tripped Coleman on the edge of the area.

With both Watford and Leeds winning elsewhere, Everton will go into another vitally important home game on Thursday against Newcastle sitting just a point above 19th place having won just two League games in almost six months.

With games running out, Lampard needs to find a way of picking up points to stave off the gravest threat from relegation Everton have faced in 25 years.