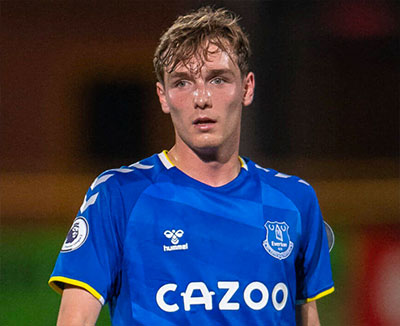 The youngster has been enjoying plenty of first-team football with the League Two side since his loan switch from Everton's U23s in the January transfer window.

Rovers boss, Mikey Mellon, was full of praise for him after the game:

“He's technically such a good little player. He's capable of knowing when to link up with the front men and he's capable of driving that midfield at back fours. That is something as a 19-year-old. That's all he is and he'll develop as he goes along. He's had a good night tonight.”

The lad from Birkenhead has made 8 appearances so far and will be hoping to play a key part in their push for promotion between now and the end of the campaign.

He has been on the books at Everton for his whole career to date and rose up through the Finch Farm Academy to impress without making it into the senior matchday squad yet.

Warrington has been a key player for the Toffees at various youth levels but is yet to make a senior appearance.

Fine name for an Everton footballer by the way.

Hopefully part of the first team next season, in the Premier League.

Wow Bobby Collins was a great wee player. Hard as nails and could he run a midfield?

Interesting there has been so little talk about his contract, which expires in June:

“I’m just taking each day as it comes. I don’t try and think about contracts too much. If a pathway opens up and I think it’s the right one then I’ll take it, but anything could happen from now until the end of the season.

“I’m obviously keeping an open mind to what’s going on.”

Head turned, doesn't fancy a future with Everton or the club not being interested?

Shame, I really like the potential in this player.

Michael Kenrick
16 Posted 01/04/2022 at 20:45:44
Yea, it's an odd one, Danny. I was really surprised given his exposure and visibility at Tranmere that there seemed to have been no discussion or speculation about his Everton contract, which now has less than 2 months to run. Remember the chatter about Small, then Simms, then Dobbin?

Perhaps the club are increasingly circumspect about committing to long contracts but he's young and surely his wages are relatively small – should be exactly the sort of player to build the new team with going forward?

Michael Kenrick
17 Posted 01/04/2022 at 21:48:27
Apparently it was mentioned back in February that Everton were talking to him about a new contract, per The Athletic.