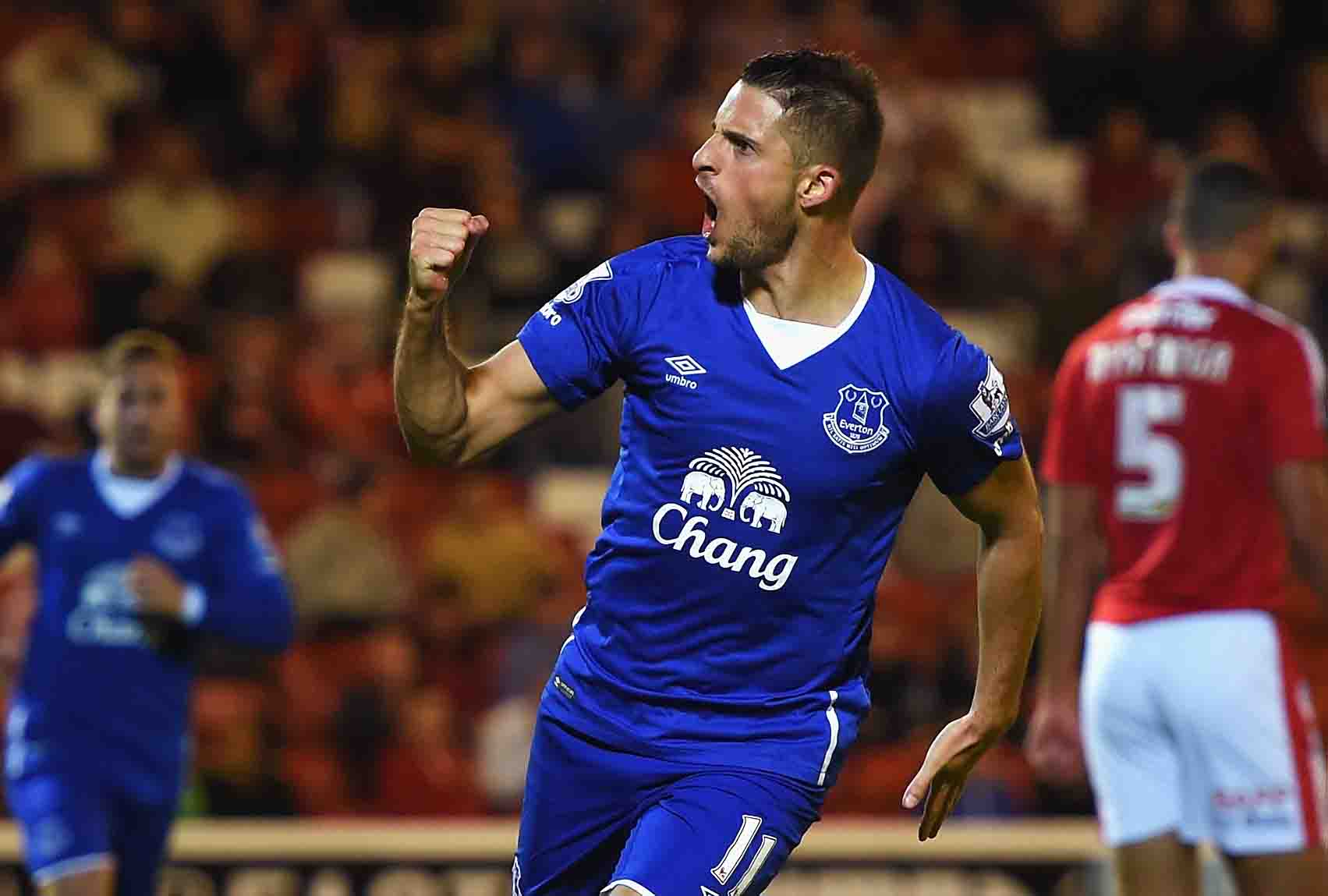 When Jack Rodwell was somewhat surprisingly sold a week before the 2012-13 season kicked off, David Moyes wasted no time in attempting to put some of the £12m received from Manchester City to good use.

An approach to Olympiacos and a bid of around £6m was made to trigger a release clause in the contract of Belgian international, Kevin Mirallas, who was already firmly in the sights of Arsenal.

It took the best part of a week but Everton landed their man despite the Gunners' interest and the 24-year-old forward put pen to paper on a four-year contract the day before the Blues' season opener with Manchester United.

Hampered by a shoe-string budget, Moyes's small squad had for years been short of effective and consistent attacking options but he signalled his intent to finally put together a potentially dangerous forward line with the quadruplet acquisitions of Nikica Jelavić, Steven Pienaar, Steven Naismith and then Mirallas in the 2012 calendar year.

Born in Liege and a product of Standard Liege's youth system, Mirallas left Belgium as a 16 year-old to join Lille in France where he spent four years before moving on to St Etienne for a further two seasons in 2008 in a €4m move.

He made 129 appearances in League 1 and notched 13 goals, but it wasn't until he joined Olympiacos for €2m in 2010 that he began to attract wider recognition with an impressive goals return over the ensuing two seasons.

14 goals in his first season made him second top-scorer in the Greek Super League behind Djibril Cisse of Panathinaikos, but he claimed the top spot in 2011-12 with an impressive 20 goals in 25 games as Olympiacos reclaimed the league championship.

A versatile forward who could play up front or out wide and a YouTube showreel to rival the best of them, Mirallas's arrival was eagerly anticipated by Evertonians hoping to finally see some resolution to the problem area of the Blues' comparatively weak right side.

And he made an almost instantaneous impact, offering pace, trickery and a threat from goal as evidenced by his full debut in a League Cup tie against Leyton Orient where he scored twice and might have had a hat-trick in a 5-0 win for the Blues.

A hamstring injury suffered in early November against Sunderland and then a relapse against Tottenham a month later would deprive Everton of their new-found attacking weapon for the best part of three months and the team struggled at times in his absence.

After an abortive return in an FA Cup Fourth Round tie against Bolton in late January, Mirallas made only his ninth start for Everton against West Bromwich Albion, safely completing an hour of the 2-1 home win as his recuperation continued.

He started his third season at Goodison Park with goals against Chelsea, West Brom and Wolfsburg but pulled up after a good burst of speed against Liverpool at Anfield,, and tore his hamstring again. He would not recover for a number of weeks, coming back into the side against West Ham.

But another season of mixed fortunes will be remembered mainly for a penalty fiasco against West Bromwich Albion, when Mirallas usurped authority by insisting on taking a penalty, one he subsequently missed and Everton had to settle for a goalless draw.

The increasingly predictable talk of wanting Champions League football also rankled with supporters, with quotes to that effect adding to concerns about his level of commitment to the Blues in reference to the January 2015 transfer window.

He ended up staying at Goodison, feeling obliged to help Roberto Martinez's team fulfill its potential but while extremely talented, Mirallas continued to fall short of what that ability promised.

His form at times could be spectacular, but he could drift out of games for long spells. His impact from the bench perhaps came to be the most defining feature of his Everton career by the end, where he could sometimes provide attacking impetus down the final stretch of games. Over the course of 90 minutes, however, the Belgian could struggle.

As the 2014-15 season ended, the rumour mill went into top gear, linking Mirallas with a move to Tottenham but he eventually agreed to a new three-year contract at Everton.

However, as the new season progressed, he found himself sitting on the bench far too often, and not getting the field time he felt his skills merited. When he did get on the pitch that season in added time in a Premier League game at Swansea, his frustration got the better of him and he was sent off just a minute after coming off the bench.

When his ban was over, he still got little playing time and speculation that he might move on resurfaced in the New Year. It was a pattern of under-achievement and talk of a move away that continued under Martinez's successor, Ronald Koeman.

He was still not guaranteed a first-team place under the Dutchman so it was somewhat surprising that in May 2017 he penned new three-year contract that would effectively tie him to the Blues until he was 33.

Mirallas asserted that he was settled in the northwest of England and was committed to helping Everton push on under Koeman in 2017-18, particularly in the wake of the long-term injury suffered by fellow winger, Yannick Bolasie.

And yet as the summer transfer window wound down that year, Mirallas was swayed by serious interest from his former club.

"I really wanted to join Olympiakos. I'm really sad. Everton didn't want to let me go," he complained after the Blues failed to agree terms with the Greek side.

As Koeman's tenure spiralled out of control, eventually leading to his sacking in October 2017, Mirallas's erratic form continued. Where his experience and match-winning talents of old were sorely needed, he seemed incapable of delivering and when Sam Allardyce replaced the Dutchman the following month, the Belgian would soon find himself out of the squad altogether.

That followed reports that he and team-mate Morgan Schneiderlin had been sent home from training for indiscipline while caretaker boss David Unsworth was in charge.

Mirallas finally got his move back to Greece in the January 2018 transfer window, with Olympiakos securing a loan deal for him until the end of the season.

A source close to Mirallas claimed, as quoted by The Star: "He was unhappy in Everton, even from the start of pre-season. He understood that he would not be the first choice, although when he signed a new contract, he was led to believe that he would be an integral part of the team.

"He had no problem with Sam Allardyce, because he is a new coach. He didn't have a problem with Big Sam at all, more with the previous boss and the board."

Mirallas was greeted with a hero's welcome when he joined the Greek club and the hope for all parties was that he would be offered a permanent transfer in May.

Ultimately, however, the Greeks had no interest in a permanent deal, with the disappointing form Mirallas exhibited at Everton over his last couple of seasons following him to the Karaiskakis Stadium, although his attempts to impress were not helped by disruptions to the Greek league that season.

Olympiakos eventually terminated Mirallas's loan spell early following a succession of poor displays. It represented a sour end to a move that the Belgian forward had long sought as a way to resurrect his career, particularly in view of the upcoming World Cup Finals in Russia.

He was left out of Martinez's Belgium squad for the World Cup where his former international team-mates would go on to finish third in the tournament.

Mirallas, at this stage wearing the No. 8 shirt, worked hard in the summer pre-season, however, in an effort to impress new Blues boss Marco Silva but was ultimately deemed surplus to requirements.

He completed a season-long loan move to Fiorentina a few days before the start of the new season, with some reports suggesting that La Viola had negotiated an option to make the transfer permanent in 2019 for around €7m.

By all accounts, he didn't have a very impressive time in Italy, managing just two goals as he made a number of his appearances off the bench. Fiorentina were nearly relegated, the club was sold and there was little prospect of Mirallas signing permanently for the 2019-20 season.

He returned to Finch Farm once more in the summer of 2019 and took part in Everton's pre-season programme but his demotion to jersey No. 28 indicated how far off he was from first-team contention as he entered the final yeat of his contract with the Blues.

He ultimately secured a move to his native Belgium just before the European transfer deadline that year, signing a one-year deal with Royal Antwerp.