As a slice of Everton history, David Prentice's new book is a fascinating and frequently humourous skip down memory lane; an insider’s insight into the way football used to be recounted with the enthusiasm and love of a devoted Blue. 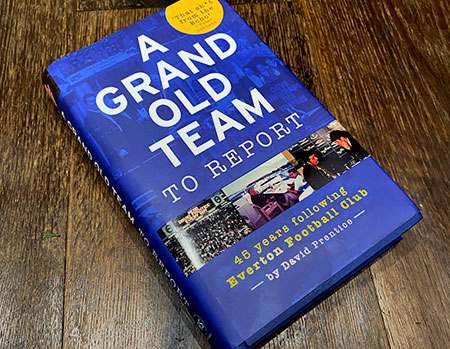 Amid the first COVID-19 lockdown earlier this year, as this infernal virus was sweeping its away across the globe, millions of us suddenly found ourselves with a lot of extra time on our hands. If you entered the spring quarantine with grand plans to fix up your home, learn a new skill or write that book that’s been germinating in the grey matter for years on end but ultimately just ended up watching far too much Netflix and eating a lot, you probably weren’t alone.

Thankfully for we Evertonians, the Liverpool Echo’s Head of Sport, David Prentice, did indeed take the opportunity to write that book he always wanted to and the result is A Grand Old Team To Report: 45 Years Following Everton Football Club, his entertaining memoir of following the Blues in his capacity as supporter and journalist, starting in the 1980s at the Daily Post before he moved over the partition at Old Hall Street to the Echo.

As a slice of Everton history it’s a fascinating and frequently humourous account of the transition away from the days when the local Everton reporter was, as a daily visitor, almost part of the furniture at Bellefield to the current era of Finch Farm’s gates, the security hut at the end of the driveway and the regimented segregation between the structured, protected lives of modern-day footballers and both the people who support them and those who report on them.

There is a wistful nature to the earlier stories and anecdotes that David shares as he charts his rise from bookish, late-blooming Blue in the days of Gordon Lee, Bob Latchford and Andy King to budding journalist during the halcyon days of the mid-1980s, and then to chief sports writer at the city’s most prominent paper against the backdrop of more tumultuous events at Goodison Park in the 90s. As he looks back on his career thus far, he will no doubt feel regret at the intimacy and access lost amid the modern game but he will also surely feel enormously grateful to have been as close to the beating heart of his beloved Everton — from players to managers to chairman — as he was for so many years.

David shares tales of booze-laden escapades with Everton players of the past and eventful pre-season tours embedded with the Blues’ squad; of internal bust-ups and inside stories from some of the club’s more controversial transfer sagas; and of David Unsworth’s role in his proposal to Evertonian royalty itself in the form of his beloved wife Melanie, grand-daughter of one William Ralph Dean. It’s hard to imagine now, in these very different times, how a head reporter from the local paper’s life could become so intertwined with Everton — to the point that two of its former managers attended were guests at his wedding — without that intimate and sometimes symbiotic relationship that club staff and local reporters once enjoyed.

That’s just how it was before the days of mobile phones, emails, the Internet and social media; of millionaire footballers behind high-walled mansions, high-powered agents and the near-constant pressures of Premier League management. You ended up sharing a taxi back to a Tuscan resort with Richard Gough, being driven home with the FA Cup on your lap and ending up on stage in an Everton pantomime with Martin Dobson, Roger Kenyon, John Bailey and George Telfer!

There are more poignant moments, too, of course — not least the passing within a few months of each other of Gary Speed from suicide and David’s father, Eric, from cancer, and Dixie Dean himself in the most appropriate of places at Goodison Park. David also touches on the sometimes awkward balancing act of “being a football fan first, reporter second” and those occasions where answering for your stern but well-meaning criticism of the team in print entails going down to the training ground to face the music in a room full of disgruntled players or being ostracised for a year by one club chairman and branded as “that shit from the Echo” by another!

David’s lament that, “after two managers in 15 years, Everton then had four in three-and-a-half… and I never really established a rapport with any of them,” again cuts to the changed nature of the game from the days when he would share a daily cup of tea with Howard Kendall. As such, the gems of A Grand Old Team To Report lie in the first two decades or so of his career and, for Evertonians of a particular vintage, this will be an entertaining skip down memory lane, while the later chapters are, necessarily, viewed with a more detached lens.

But with some wonderful stories along the way, recounted with the enthusiasm and love of a devoted Blue and the dignity and sensitivity of one of life’s gentlemen offering an insight into the way football and Everton used to be, it’s a terrific, easy read for any Blue.

A Grand Old Team To Report is published by Reach Sport and is available for purchase now in hardback from the publisher or from Amazon (in stock there 30th November).


Ian Jones
1 Posted 29/10/2020 at 07:35:38
Thank you Lyndon for this review. Looks an interesting book to read.
Peter Oâ€™Neill
2 Posted 29/10/2020 at 11:14:27
Anyone else had problems trying to buy this book from Reach Sport? Tried 4 times now and just get to a point where they say “don't close the browserâ€ but the wheel just goes round for ages (latest one 2 hours ). Frustrating. And they are not at home on the phone either.
Dennis Stevens
3 Posted 29/10/2020 at 11:40:54
Treated myself to an early Chrimbo gift - 2 actually, as they also have an offer on Howard Kendall: Notes On A Season.
Dave Abrahams
4 Posted 29/10/2020 at 12:46:50
I had many telephone chats with Dave over the years and he always talked well of our team and was a solid supporter of them, told the truth, the good bad and indifferent parts of some players, I also think he saw them with blue tinted glasses on at times, but he was always easy to talk to and a gentleman “ Can you spare a couple of minutes Daveâ€ â€˜I'd ask, and nearly always he could. As good an Evertonian as most on here.
Christy Ring
5 Posted 29/10/2020 at 14:38:15
Dave#4 Nice few words Dave
Mike Gaynes
6 Posted 29/10/2020 at 14:52:53
Dave #4, I wish you would write a book too. Your wonderful recollections and anecdotes should be preserved somehow. I still remember some of the stories you told me that evening at Anfield.

I've ordered this book from Amazon.

Peter Mills
7 Posted 29/10/2020 at 21:40:41
Dave's a very nice guy, always a pleasure to have a pint with him, generous, a wealth of stories, steeped in the history of the club, but does indeed see life through blue-tinted specs.

All of the above applies to Dave Prentice too. I'll look forward to reading his book.

Danny Broderick
8 Posted 29/10/2020 at 22:28:55
Dave has responded to one or two articles on here in the past. I e-mailed him once when we again had no money to spend under Kenwright. I forget what his article was exactly, but it was defending the club and stating that things could be worse, which was like a red rag to me at the time. In my e-mail I told him he'd misjudged the mood of the fan base etc. To be fair to Dave, he responded to me, I was chuffed just to get a response!

Dave is very obviously one of us, and it can't have been easy toeing the line between club and fan base over the years. I've always enjoyed reading his articles and listening to his views on the Royal Blue podcast. I'll be ordering this book, and looking forward to hearing some of the behind-the-scenes stories...

Come on - an article or two at least.

Dave Abrahams
14 Posted 11/03/2021 at 15:54:59
Peter (2), your post was a few months ago, if you still haven't got got it and you live in Liverpool you can have mine, as John (9) says the book brings back a load of memories, and that Aston Villa replayed league cup final is one of them, a great game, brilliant atmosphere, although the crowd swelling and movement was frightening even then, years before the tragedy occurred, a great night scarred for me, at the end of the game, coming out, walking away from Hillsborough, to hear that those bastards had scored a late winner versus a French team, St, Ettianne? I know that the scorer was the part time player David Fairclough.
Barry Rathbone
15 Posted 11/03/2021 at 16:20:19
My abiding memory of the Wembley final against Aston Villa was a Villa fan telling me he was visibly shaken when the entire Everton end bellowed "EVERTON. EVERTON"

What support we had back in those days.