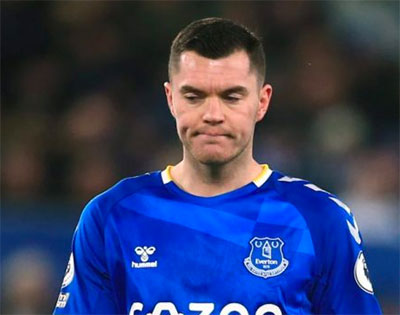 Michael Keane endured a horrendous first-half, scoring an own goal and conceding two more alongside Mason Holgate before he was hooked at half-time

Everton endured further humiliation in what continues to be a horrendous season as they were demolished by Tottenham and lost for the fourth time in five games under new manager Frank Lampard.

In a parallel to their previous away game at Southampton, the Blues started purposefully and carried the early threat but quickly fell apart after just a quarter of an hour and eventually conceded five times before Spurs eased off in the second half to spare further damage to Everton's worsening goal difference.

Michael Keane scored an own goal for the second time this season and put in a shocking performance over the first 45 minutes before being hooked at the break, with Lampard indicating afterwards that the defender has been “feeling unwell” for the past few weeks. However, the hosts had already scored twice more through Son Hueng-Min and Harry Kane and they would add a fourth before a minute of the second period had elapsed.

Kane wrapped up the scoring with an impressive volley in the 55th minute while Everton failed to register a shot on target for the second away game in succession to leave themselves sitting a single point above the relegation zone.

With Donny van de Beek eligible again after being cup-tied for the FA Cup win over Boreham Wood on Thursday evening, Lampard was able to name a three-man central midfield with the Dutchman alongside Allan and Abdoulaye Doucourè.

Dominic Calvert-Lewin returned up front after recovering from his latest knock while Jonjoe Kenny continued at left-back and Anthony Gordon started again with Dele Alli on the bench and Demarai Gray absent again, presumably through illness.

The early signs from Everton were positive as they took the game to Tottenham but without unduly threatening Antonio Conte's side and the danger inherent in with as high a line as the Blues were was signalled after just 10 minutes when Son was played into the clear behind the defence but Gordon had tracked back superbly to take the ball off the South Korean's toes before he could shoot.

The threat wasn't heeded, though, and Everton conceded twice in quick succession leaving them with a mountain to climb. First, Ryan Sessegnon powered beyond Seamus Coleman in the 14th minute and centred hard towards the near post where Keane turned the ball into his net before Kane could try and get a boot on it.

Then, three minutes later, the visitors' were carved open with ease down the centre where Kane's pass to Dejan Kulusevski was knocked through the middle to Son and he swept the ball under Jordan Pickford who was stranded but should have done better than to allow it to slide under his arm,

Matt Doherty then found himself in on the goalkeeper in the 28th minute but this time Pickford was more than equal to the task and he parried the shot while Kane's first-time effort on the rebound mercifully bounced wide before the England keeper denied Doherty again in the 34th minute.

It was 3-0 not long afterwards, however. Keane was out-muscled by Kane on the halfway line and when the ball broke to Doherty he knocked it over the top for the striker to beat offside, run into oceans of space behind Everton's absent back line and slot past Pickford.

Lampard moved to try and shore up his shambolic defence at half-time by hooking Keane and introducing Jarrad Branthwaite but the young defender had been on the field less than 60 seconds before the Blues were torn apart again.

Coleman sold Gordon short with a poor pass and Son found Kulusevski who rolled a pass across the box to Sergio Reguilon and the Spaniard, a half-time substitute himself, converted first time to make it 4-0.

Then, after Calvert-Lewin's sole contribution of note, a shot that he dragged across Hugo Lloris's goal in the 53rd minute, Eric Dier clipped the crossbar with a header before Kane completed the rout. Coleman was again at fault with a dreadful pass straight to a white jersey and when Doherty floated the ball to the back post, Kane volleyed it back across Pickford and inside the far post.

Lampard withdrew Van de Beek and then Calvert-Lewin in favour of Vitalii Mykolenko and Dele Alli but apart from a couple of corners that came to nothing, Everton didn't come close to scoring a consolation goal in the closing stages.

Instead, Pickford saved from Steven Bergwijn and Davinson Sanchez planted a header off a free-kick wide before referee Stuart Attwell put the Toffees out of their misery with the final whistle.

In a season full of horrendous performances, this one was as bad as any and it has the potential to be a particularly damaging one in terms of goal difference and the team's morale. On the plus side, Lampard takes his players back for back-to-back games at Goodison Park which has been something of a fortress for him since he took over but his worrying lack of answers to his new team's pathetic away form continues.