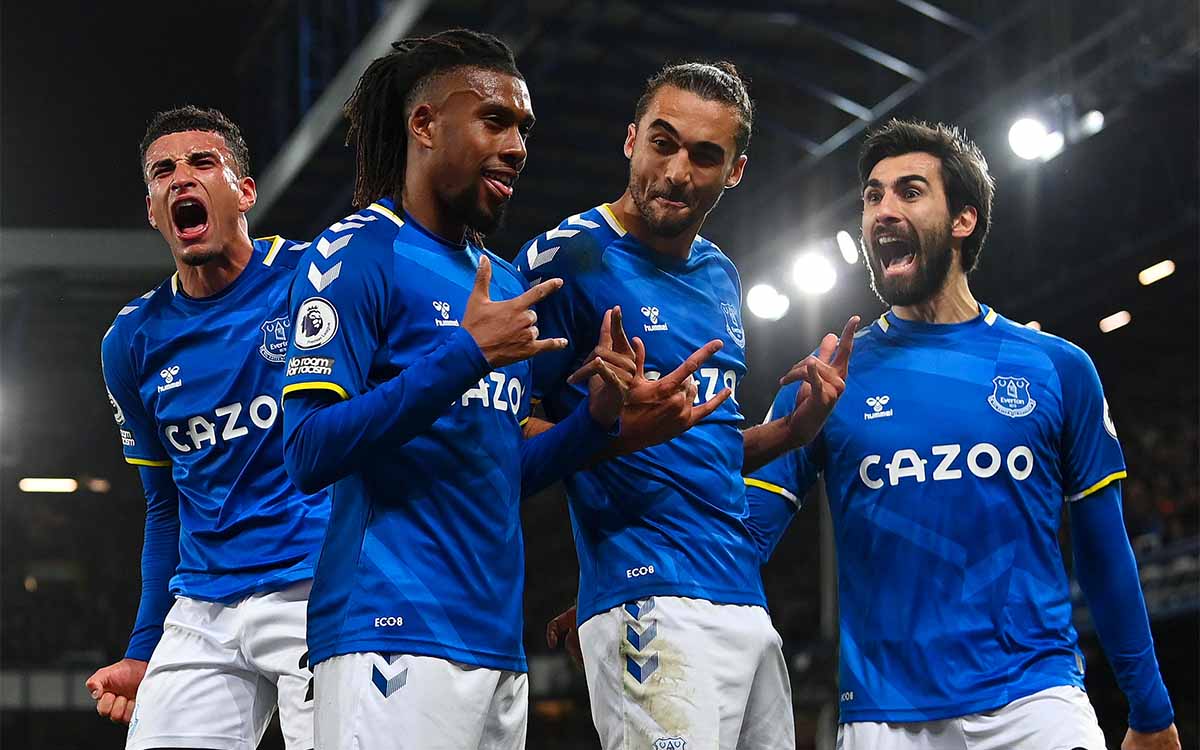 Everton survived the controversial dismissal of Allan and ended a four-match winless run in the Premier League by grabbing what was only their third victory since September on an adrenaline-fuelled night of unparalleled intensity from the stands at Goodison Park.

Alex Iwobi popped up in the ninth minute of stoppage time in a match delayed by a bizarre protest and a lengthy VAR review of Allan's late tackle on Allan Saint-Maximin to tuck home a composed left-foot shot after excellent work by Dominic Calvert-Lewin to hand the Toffees three almost indescribably important points.

It was the only goal of a match that was short on quality but long on commitment, niggle and determination from Frank Lampard's team who responded to another bear-pit Goodison atmosphere by running themselves into the ground for the cause.

While the cry from supporters since Sunday's demoralising defeat to Wolves had been for the manager to return to a three-man central midfield, Lampard was robbed of Donny van de Beek by illness which kept Jarrad Branthwaite and first-choice starter Jordan Pickford out as well while Calvert-Lewin was only deemed well enough to start on the bench.

Instead, Lampard reinstated Iwobi to the starting XI, deployed Demarai Gray and the indefatigable Anthony Gordon either side of Richarlison, and moved Ben Godfrey out to left-back to accommodate Michael Keane's return at centre-half.

Though Everton had the first chance of the game when Iwobi won a corner that Godfrey managed to get his head to but could only plant into Martin Dubravka's arms, they managed to create precious little during a tense first 45 minutes in which the visitors, in very good form coming into the evening, looked more and more comfortable as the half wore on.

Chris Wood headed straight at Asmir Begovic in the 11th minute, Ryan Fraser fired a half-volley well wide, one corner flashed dangerously across the face of Everton's goal while Wood despatched a header off another set-piece narrowly over as the Magpies looked the more likely to score before the break.

Joe Willock, meanwhile, had the first effort on target of the second period when his deflected shot was comfortably gathered by Begovic before proceedings were disrupted for more than eight minutes when a protester cable-tied themselves to the post in front of the Gwladys Street End and had to be cut loose.

When play resumed, Everton didn't manage to fashion an opportunity until Gray sliced a half-volley over the crossbar from around 12 yards out on the hour mark after good work by Seamus Coleman while Emil Krafth saw a decent long-range effort dealt with by Begovic a few minutes later.

And the Bosnian had to be at his best in the 70th minute when Miguel Almiron beat Godfrey down the outside and cut the ball back for Bruno Guimarães but Begovic pawed the ball away from his goal superbly.

What had been a fractious affair throughout got testier as the second half wore on and when Krafth chopped Richarlison down on the edge of the box, it handed Gordon an opportunity from a free-kick but his effort couldn't find its way through the defensive wall.

Everton kept the ball after the resulting corner had been cleared, though, and Gordon stung Dubravka's palms with a strong drive after excellent footwork had taken him away from two Newcastle players.

Gray was replaced by Calvert-Lewin with a quarter of an hour of the regulation 90 minutes to go and he was almost handed a quick chance to break the deadlock but Richarlison's whipped cross in the 80th minute was just too far ahead of him.


Everton's hopes of grabbing a vital victory appeared to have been dashed, however, three minutes later when Allan scythed Saint-Maximin down in full flight and rightly picked up a yellow card. Unfortunately, over-zealous officiating by Video Assistant referee Stuart Attwell and on-pitch ref Craig Pawson eventually saw the card upgraded to a red, to the dismay and fury of the Blues' players and crowd.

Newcastle were denied the chance to make their numerical superiority count in what ended up being more than an additional quarter-hour's play by dogged Everton defending by all nine remaining outfield players and Begovic who denied Willock with another good save at his near post.

And then, after Gordon was denied a penalty when barged over in the box, the roof came off Goodison as Iwobi plundered the winner with 98 minutes on the clock. Coleman won a full-blooded challenge against Saint-Maximin, bouncing off the French winger and moving the ball quickly forward to Iwobi.

The Nigerian glided inside the nearest opponent and found Calvert-Lewin on the edge of the box who composed himself when it looked like his first touch might have got away from him before turning and laying a lovely reverse pass into Iwobi's path where he slotted across the keeper and into the far corner to send Goodison wild.

On the sidelines, Everton's management team erupted, with Lampard admitting afterwards that he might have broken a bone in his hand in the process while the Goodison crowd, which had fought every moment along with the players all night, turned into a mass of limbs.

Fabian Schär had a wild effort at goal fly off target as Newcastle tried to avoid a second successive 1-0 defeat after going on a nine-match unbeaten to haul themselves clear of danger but the night was to be Everton's.

The victory established a three-point gap between the Blues in 17th and Watford in 18th and they still have two games in hand on everyone around them with the exception of Burnley. No one should be taking anything for granted as the run-in remains littered with difficult fixtures but the hope of everyone connected with Everton FC is that this proved to be a turning point in a miserable season.