Everton fall to predictable defeat at the Etihad 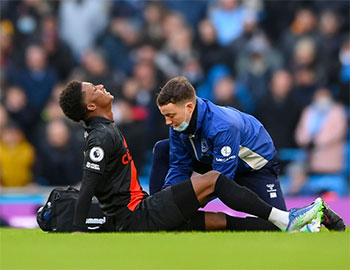 Everton were beaten soundly by Manchester City for the fourth time in 2021 as Pep Guardiola's men coasted to a 3-0 victory to keep in touch with leaders Chelsea at the top of the Premier League.

The Toffees, still labouring without key players down the spine of their team, managed to keep their embarrassingly superior hosts at bay for 43 minutes but once their rearguard action had been broken, the destination of all three points was assured.

Raheem Sterling's impressive finish set City in their way, Rodri hammered an unstoppable second 10 minutes into the second half and Bernardo Silva wrapped things up four minutes from the end.

Everton, meanwhile, managed just one effort on target in a game that was more costly than just the loss of at least a point — Demarai Gray limped off with an apparent groin strain after just 16 minutes and the booking Richarlison picked up in the first period means he will be suspended for next weekend's trip to Brentford.

With Dominic Calvert-Lewin, Abdoulaye Doucouré and Yerry Mina all still missing and André Gomes an ongoing injury absentee as well, the Blues were unchanged from the side that ground out a goalless draw against Tottenham prior to the international break.

Though they started on the front foot from the first whistle, however, the visitors soon found themselves trapped in a familiar pattern of chasing City's shadows as the reigning champions waited for their possession to bear fruit.

Phil Foden had their first genuine chance with 10 minutes gone when Sterling picked him out with a deep cross that the young midfielder couldn't quite direct on goal with a header and the roles were reversed in the 27th minute when Sterling also headed over craning to get over the ball.

A minute after that, Bernardo found himself in behind the defence off Cole Palmer's neat pass but Jordan Pickford closed the Portuguese down well and when the ball was clipped back in, Ilkay Gundogan's header dropped onto the top of the crossbar as Guardiola's men got closer to making the breakthrough.

On the half-hour mark, Palmer's own shot was palmed aside by Pickford and the goalkeeper gathered Sterling's follow-up before referee Stuart Atwell awarded a soft-looking penalty for what he adjudged to be a foul by Michael Keane on Sterling but the official was forced to reverse his decision following a check of the pitch-side monitor.

One brief and rare attacking moment appeared to open up for Gray's replacement, Alex Iwobi, at the other end but the winger was easily caught by Kyle Walker as he tried to drive towards goal. And a minute after that, it was 1-0 to Manchester City.

Joao Cancelo delivered a brilliant pass straight through the centre of Everton's defence with the outside of his boot and Sterling took it on the half-volley, steering the ball expertly beyond Pickford.

The half-time interval was book-ended by promising set-piece opportunities to Everton that came to nothing and City's dominance was further underscored when they doubled their lead in the 55th minute.

Allan's clearance dropped to Rodri 25 yards from goal and the Spaniard rifled a rising, first-time thunderbolt into the top corner well clear off Pickford's despairing dive and it was, effectively, game well and truly over.

Substitute Riyad Mahrez could have made it three when he popped up in oceans of space on the far side of the box on the hour mark but his first-time effort was scuffed well off target.

Rafael Benitez then withdrew Fabian Delph in the 63rd minute in favour of Salomon Rondon but neither the switch to 4-4-2 nor the Venezuelan himself could make much impact on proceedings.

Nevertheless, Everton did manage some of their brightest moments on an otherwise depressingly unproductive afternoon in the final 25 minutes. Iwobi's chipped cross invited Richarlison to attempt an acrobatic above-the-shoulder volley but he couldn't make proper contact while another laudable ball in, again from Iwobi, put Coleman in near the byline but the Irishman was quickly closed down and the chance was lost.

City were in again at the other end almost immediately but Pickford made an excellent save to deny Sterling but the almost inevitable third goal arrived in the 86th minute when another effort by Palmer took a heavy deflection and arrived at the feet of Bernardo who just had to slot home and complete Everton's misery.

The result represented the Toffees' ninth straight defeat to City in all competitions and extended the winless run under Benitez to six matches, with a run of difficult games still ahead all the way up to Christmas.

The manager will hope to have some of those injured players back in the coming weeks but there was precious little to take from this performance or result in terms of optimism for the travelling Blues.