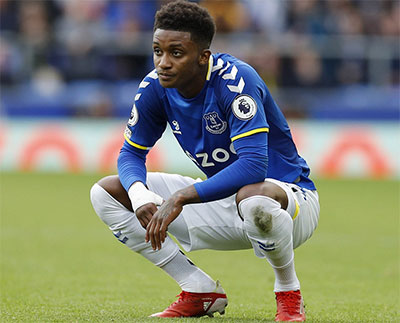 Everton's miserable run of form continued as they extended their recent sequence to six defeats in their last seven matches with their heaviest loss to neighbours Liverpool at Goodison Park in almost 40 years.

The Reds were heavily favoured going into the 239th meeting between these two clubs and they threatened to run up a rugby score in the first half as they roared into a 2-0 lead within the first 20 minutes, with their hosts all at sea.

Jordan Henderson fired home from an unmarked position in the ninth minute and Mohamed Salah doubled Liverpool's advantage 10 minutes later when he was put into the clear to curl the ball around Jordan Pickford.

Everton pulled a goal back eight minutes before half time with a well-taken strike by Demarai Gray, but their fight-back in the second half was undercut cruelly by an awful era from Séamus Coleman which allowed Salah to score his second of the game and effectively put the contest beyond Everton's reach.

Diogo Jota rubbed salt into the wounds in a rapidly emptying Goodison park when he rattled in a fourth to underscore the enormous gulf in quality between these two sides.

Rafael Benítez, whose name was predictably song with joy by the visiting friends in the Lower Bullens in the closing stages of this embarrassing rout, had welcomed back Richarlison from a one-match suspension and was able to deploy Gray wide on the left from the start after the winger had only been able to make the bench at Brentford on Sunday because of an adductor strain.

However, the manager's decision not to deploy someone like Fabian Delph in a three-man midfield ultimately proved costly as Liverpool tore through the Blues mid-section with ease in the early going and might've scored twice before Henderson eventually did.

Joel Matip missed the target with a completely free header off Liverpool's first corner of the game in the second minute  and Salah volleyed over after Andros Townsend had gifted the ball to Jota in the third while Pickford had to make an impressive save in the eighth minute to deny the Egyptian after Mané had picked him out with a low cross from the left.

Everton couldn't cope with Liverpool's passing and incisive running and when Jürgen Klopp's side attacked again down the left through Andrew Robertson, the Scot cut the ball back to the top of the penalty area where Henderson arrived untracked to bend a left-footed effort around the goalkeeper.

The home side had a couple of flurries that saw dangerous balls flash across the box, one of them cleared behind by Matip before Gray could pounce while at the other end Trent Alexander-Arnold tested Pickford with an accurate drive that the England international palmed away to safety.

Pickford was left stranded a minute later, though, when Liverpool cleared a corner from their own box and counter-attacked quickly, with Henderson sending Salah away into space where he proved to be as deadly as always with an unerring finish inside the far post.

2-0 almost became a humiliating 3-0 when another corner from the Liverpool right bounced off the unwitting Michael Keane and bounced a foot wide and Pickford had to be alert once more to beat away an effort from Mané as the Toffees continued to be overrun.

A lifeline arrived, however, through Gray. Richarlison collected a pass and turned smartly to release the winger who had taken up an excellent position between the last two defenders and, taking a perfectly-weighted through-ball in stride, he tucked it under the advancing Alisson Becker to halve Everton's deficit.

Abdoulaye Doucouré had a chance to level things right on the stroke of half-time when Lucas Digne got to the byline and crossed but the midfielder's shot from the angle was blocked near the goal line.

Doucouré would have Everton's first chance of the second half but couldn't get enough power on his header to trouble Alisson while Ben Godfrey had to make an excellent last-ditch tackle to deny Mané as the Blues were easily carved open once more.

Despite the obvious disparity in quality, Everton were still very much in the game at 2-1 and were doing their best to force Liverpool back when Salomon Rondon, an energetic and hard-working presence in attack even if he didn't get any chances in the box, had to come off with a hamstring injury.

He was replaced by Anthony Gordon who wasted no time getting stuck in and adding his own tenacity to the mix but after Townsend had seen a direct free-kick deflect off the defensive wall and the resulting corner fell short and was cleared, Coleman's blunder under pressure from Salah handed Liverpool a killer third goal.

The Irishman failed to control a bouncing pass from Gray and was robbed, with Salah racing away before slipping the ball past Pickford and just inside the post.

That knocked the remaining fight out of Everton and though Delph was somewhat curiously introduced with 17 minutes left and Cenk Tosun was thrown on later for a rare run-out, there was time to the visitors to score a painful fourth.

Jota eased his way past the flat-footed Allan and drilled a shot into the roof of Pickford's net to round off another miserable derby defeat for Everton.

Benitez will, no doubt, point to the spirit and endeavour his charges displayed but they were beaten from the first whistle by a naïvely open formation and a general lack of cohesion to Everton's play that, ultimately, comes down to a manager who was unpopular before he arrived but who is fast losing any backing the supporters were prepared to give him.

It's now over two months since the last win and the club sit five points above the relegation zone with daunting-looking fixtures against Arsenal, Crystal Palace, Chelsea and Leicester to come. If the manager is to survive, he must start demonstrating he has the answers in very short order or this season could end in unthinkable disaster for one of the Premier League's ever-present clubs.