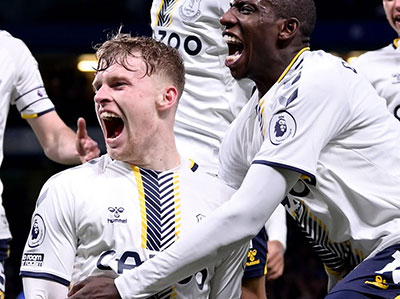 A hugely under-strength Everton side earned an impressive point at title-chasing Chelsea tonight as Jarrad Branthwaite scored his first goal for the Toffees on a rare start.

The teenager, one of five players 20 or younger who would feature in the match, converted an Anthony Gordon free-kick to cancel out what many no doubt assumed was going to be the winner from Mason Mount just 4 minutes earlier.

It took an excellent save from Jordan Pickford to preserve parity 10 minutes from time but Everton's youthful team were rewarded for a dogged defensive stand that frustrated Chelsea for long periods after surviving a catalogue of close calls in the first half.

With Dominic Calvert-Lewin, Yerry Mina, Richarlison and Andros Townsend ruled out with injury, Seamus Coleman and Allan on the bench nursing minor knocks, Lucas Digne reporting in sick and Salomon Rondon, Demarai Gray, Cenk Tosun and Fabian Delph missing from the travelling party, Rafael Benitez opted for a five-man back line with Branthwaite coming in as one of three centre-halves between Jonjoe Kenny and Ben Godfrey. Ellis Simms was handed his first start up front.

Chelsea, meanwhile, were missing a handful of players themselves — Mateo Kovacic and Ben Chilwell were already ruled out when Chelsea learned that Romelu Lukaku, Timo Werner and Callum Hudson-Odoi had all returned positive results for the coronavirus while Kai Havertz was isolating while he waits on a Covid test of his own — but Thomas Tuchel was still able to field a dauntingly strong line-up and they dominated the first half without making the breakthrough that a succession of good chances suggested they would.

If the mis-match in quality invoked a sense of inevitability about the destination of the points, the pattern of the first 45 minutes seemed to reinforce that. Reece James and Mount both narrowly missed the target inside the first 8 minutes and Pickford made a good stop to keep Christian Pulisic's heel-flick out in the 11th minute.

Hakim Ziyech almost punished Mason Holgate for an errant header shortly afterwards and the Morocco international forced another save from Pickford after he was picked out in the centre by a low cross from Marcos Alonso before dragging another effort wide later in the half following a one-two exchange with Pulisic.

While Everton would have just one sight of goal when Gordon fired a tame effort that Eduard Mendy safely gathered, Chelsea looked to have taken the lead seven minutes before the break when Antonio Rudiger prodded the ball into the path of Mount who just had to beat Pickford but the England goalkeeper made a smart save with his foot to keep it goalless at half-time.

More of the same was expected after the break and Pickford was called into action again to tip a deflected Mount shot behind before Ruben Loftus-Cheek spurned a free headed chance that bounced off his shoulder and over the bar.

However, Everton grew more adventurous on the counter-attack and with more composure in the final third, they might well have scored first. Alex Iwobi wasted a great chance on the break when he elected not to play Abdoulaye Doucouré in through the heart of the Chelsea defence in the 53rd minute.

Ben Godfrey then scuffed a half-chance at the goalkeeper a few minutes later while Rudiger could only head a free-kick wide of the back post at the other end before Benitez made the first of three changes he would make on the night.

Simms had toiled with no service at all against Rudiger and Thiago Silva and was replaced by the more mobile Lewis Dobbin but it was one of the older heads giving up possession during another promising counter-attack that led to the hosts opening the scoring with 20 minutes to go.

Doucouré chose the wrong option in turning inside and his attempted pass was cut out allowing Chelsea to quickly counter, James to slide the ball in to Mount and he rammed it past his international team-mate from close range.

Benitez immediately withdrew the ineffective André Gomes for Jean-Philippe Gbamin but it was a foul on the ever-willing Gordon that set up the equaliser for Everton. Gordon took the set-piece himself, swinging the ball to the back post where Branthwaite timed his run well and guided it deftly inside the post with an out-stretched leg.

Needing to score to keep pace with leaders, Manchester City, Chelsea pushed for a winner in the closing stages and looked to have secured the points when the unmarked Thiago Silva met a corner from the Londoners' right but Pickford did superbly to get down and push it around the post.

At the other end, Dobbin took one touch too many in the box and was closed out as Everton threatened on the break once more but it was back down the other end where the Blues completed the job by holding firm in defence to take the draw.