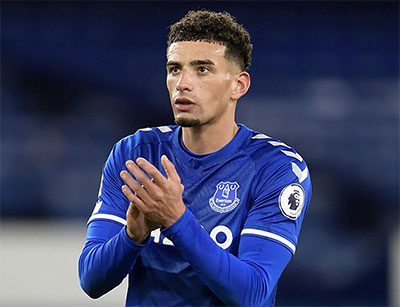 Ben Godfrey suffered a leg fracture after just 10 minutes and had to be stretchered off the pitch, adding to Everton's injury woes

The defender had to be stretchered off the field with what looked to be a broken leg following a strong tackle on Kai Havertz and the Blues later lost Yerry Mina to injury while the absence of any striking presence up front meant that their chances of getting back into the game once they had fallen behind were slim.

With Dominic Calvert-Lewin out injured, Salomon Rondon suspended and Ellis Simms out on loan, the Blues were left without a recognised centre-forward and Dele Alli had been expected to fulfil a “false nine” role. However, the former Tottenham man was named among the substitutes once more as Frank Lampard opted for pace on the counter-attack in the form of Demarai Gray and Anthony Gordon.

Dwight McNeil made his debut in support going forward and both James Tarkowski and Nathan Patterson also made their first official Premier League starts for the club at the back.


It was Tarkowski’s over-zealous challenge that yielded the first dangerous set-piece of the afternoon when he jumped in on Raheem Sterling and Jordan Pickford saved Havertz’s header but the game was a mere 10 minutes old when Godfrey’s afternoon was ended.

His own poor back-pass forced Pickford to scramble along the byline to clear but even though the ball had visibly crossed the line, play was allowed to continue and Godfrey put in a typically robust covering tackle on Havertz before he could threaten the Everton goal.

He immediately signalled to the bench that he has sustained a significant injury and after some eight minutes, was carried off to hospital while Mason Holgate came on to replace him.

Holgate was pressed into immediate action to defend a barrage of Chelsea corners and he was there again to head away a set-piece after Mina’s superb block had diverted the ball behind in the 33rd minute.

While Everton would rue the absence of Calvert-Lewin as a couple of excellent deliveries from the left flank went begging and Tarkowski forced Edouard Mendy into tipping his header over from a corner, Chelsea were tidy in possession but lacked their characteristic attacking danger and intensity.

The hosts were doing a decent job of keeping the visitors at bay and restricting them to half chances and dead-ball opportunities until Sterling had the ball in the net after Pickford had spilled Ngolo Kante’s shot into his path but the former City forward was flagged for offside.

A couple of minutes earlier, Everton had had their best look-in on the break as Gray and Gordon raced away in a two-on-two situation but the former’s attempt to find the latter in space was cut out by Thiago Silva who anticipated the pass and stuck out as timely foot.

Unfortunately, the good work done by the Toffees and that of Abdoulaye Doucouré, who had been imperious up to that point, was undone deep into the time added on for Godfrey’s injury when Sterling jinked into the box and was clumsily barged over by the Mali international leading Craig Pawson to point to the spot.

Though Mina and Pickford did their best to put him off — the Colombian was booked for not retreating out of the 18-yard box in time — Jorginho made no mistake with the penalty, sending the keeper the wrong way.

The second half began brightly enough for Lampard’s men as Gray was sent away down the channel where he beat Silva for pace but the Brazilian eventually got back and lunged to deflect the shot behind.

Three minutes later, after McNeil’s attempted centre for Doucouré was knocked  behind, Mendy failed to deal with the resulting corner, Iwobi squared it back to Doucouré around 10 yards out but the goalkeeper did well to stop his shot.

But the Blues struggled in general to create chances and they would have to wait until the 73rd minute for their next genuine chance that fell to substitute Dele, on for McNeil, but he couldn’t sort his feet out in time and Chelsea smothered him.

Thomas Tuchel’s men, meanwhile, had resorted to delaying tactics and time-wasting and they barely threatened Pickford’s goal until seven minutes from the end of the regulation 90 when Vitalii Mykolenko made a goal-saving intervention to prevent Sterling from putting the game to bed off Marc Cucurella’s cross.

Ultimately, it was an afternoon of toil and frustration for Everton that yielded yet more injury to a depleted side but it was game that was also illuminated by a terrific first 90 minutes from Patterson, a solid debut from Tarkowski and very good displays from Iwobi and Doucouré.

There was, at least, another bright spot in the form of Amadou Onana who took a seat in the Director’s box mid-way through the game as his move from Lille awaits the rubber stamp. It’s up front where the immediate priorities lie, with for more League games to come before the end of the summer transfer window.